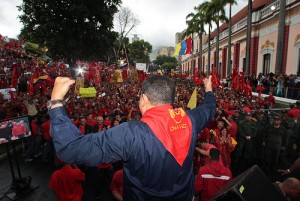 “What a march! This is popular power!” Chávez said in a tweet.

The march was attended by representatives of the cabinet and Rafael Ramírez, the Minister of Energy and Petroleum.

Ramírez said Friday that Venezuela would continue to send the 1.2 million barrels of oil per day that his country currently exports to the United States.

The leftwing governments of Daniel Ortega in Nicaragua and Raúl Castro in Cuba both released statements in support of PDVSA and criticizing the U.S. sanctions.

Sunday’s march marked the second major protest in Venezuela since the Obama administration slapped PDVSA with sanctions last week for allegedly violating the Iran Sanctions Act of 1996. Ramírez denies that Venezuela has exported gas to Iran in the period covered by the 1996 act.

The sanctions prohibit PDVSA from competing for U.S. government contracts, acquiring U.S. export licenses or receiving financing from the U.S. Export-Import Bank. Venezuela is still allowed to export crude to the United States, however, and the sanctions do not apply to PDVSA subsidiaries.