A PDVSA plant in Guayaquil, Ecuador. 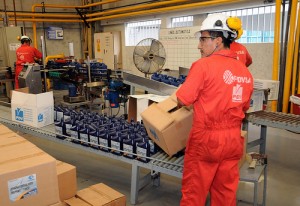 A PDVSA plant in Guayaquil, Ecuador.

The sanctions show the U.S.’s impatience toward Venezuelan President Hugo Chávez’s embrace of Washington’s enemies, such as Iran’s Mahmoud Ahmadinejad and Libya’s Muammar Qaddafi. The U.S. said that PDVSA violated the Iran Sanctions Act of 1996 by shipping some $50 million worth of a fuel additive to Iran between December and March.

“These sanctions constitute a warning shot from the U.S. government to Venezuela in its dealings with the Iranian regime,” said Boris Segura, Latin America economist at Nomura Securities International. “The authorities’ reaction at this juncture is key. If they interpret these sanctions as an attack of the ‘empire’ on the revolution, we could expect further measures to try to armour plate the country from potentially more severe sanctions.”

PDVSA is now prohibited from competing for U.S. government contracts, from getting financing from the Export-Import Bank of the United States and from obtaining U.S. export licenses. PDVSA can no longer offer fuel to the U.S. Strategic Petroleum Reserve – a role it has played in the past — and its exclusion from Export-Import Bank will boost financing costs.

Besides the prohibitions, the sanctions may also deter investors from projects with the PDVSA. “Money is cowardly, and sanctions like these — which threaten money — will have their consequences,” said Juan Fernández, who worked at PDVSA for 18 years and and was the company’s former General Manager for Financial Planning and Global Business, according to The Miami Herald.

The sanctions, however, do not bar Venezuela from exporting crude to the United States.These caveats are meant to stave off higher oil prices in the United States and oil market conditions were considered when tailoring these sanctions.

“Obviously, we consulted closely with the economic agencies, including the DOE,” said Deputy Secretary of State James Steinberg.

Venezuela’s oil minister Rafael Ramírez denied that the country has sent gasoline to Iran since sanctions on the Middle Eastern nation were approved, but Asdrubal Chávez, vice president of PDVSA, said in 2010 that Venezuela had been selling as many as 20,000 barrels a day of gasoline to Iran.

A source at PDVSA told Reuters that the company expects little or no commercial impact from U.S. sanctions. The source added that the move appeared to be primarily political, intended by the government of U.S. President Barack Obama to appease senators critical of President Chávez.

PDSVA sells fuel in the U.S. under the CITGO brand and Venezuela is the United States’ fifth-largest oil exporter.

[…] Energy and Petroleum Rafael Ramírez confirmed Monday that he would file a complaint with OPEC over the sanctions imposed by the U.S. on the state-run Petróleos de Venezuela (PDVSA) oil company for allegedly violating the Iran Sanctions Act of 1996 by shipping some $50 million […]