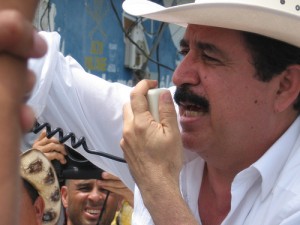 After 16 months in exile, overthrown Honduran President Manuel Zelaya returned Saturday to Honduras, where he will immediately reenter politics.

Venezuelan President Hugo Chávez, who did not travel to Honduras to witness Zelaya’s return, fired off a congratulatory tweet: “Mel Zelaya returned to his Honduran Fatherland! It’s a great victory for the Honduran people!”

Zelaya’s flight from neighboring Nicaragua arrived more than three hours later than planned after organizers suggested he wait for the Manchester-Barcelona game to finish in order to field a larger audience, according to Honduran news agency La Prensa.

“We’re pushing for a Constituent Assembly to retake power,” Zelaya said in a speech to thousands of followers who gathered to greet him outside the airport. “I came to participate in what the people want — revolutionary processes that will make this country move forward,” he added.

Zelaya thanked Honduran President Porfirio Lobo and the international community for facilitating his return, but had harsh words for the United States, who he accused of derailing an agreement he negotiated with transitional President Roberto Michelletti in October of 2009. Zelaya said Washington “boycotted” the agreement, which then-President of Costa Rica Óscar Arias mediated.

In a sharp turnaround from his position during exile, Zelaya called upon the international community to recognize the conservative Lobo administration, which was elected after the June 2009 coup. Zelaya’s new position did not sit well with one of his party’s spokesmen, Juan Barahona, who said Lobo supported the coup and Zelaya only changed his position toward the Lobo administration for diplomatic reasons.

Baharona also said he opposes Honduras’ immediate return to the OAS, in order to give time to ensure that the conditions of agreement allowing Zelaya’s return are carried out.

With Zelaya back in the country, his party — the National Popular Resistance Front (FNRP, in Spanish) — says it will now begin collecting the signatures it needs to present to the Supreme Electoral Tribunal in order to participate in the next round of elections.

Not everyone was happy to see Zelaya come back, and some lashed out at Lobo for working with Chávez to broker Zelaya’s return. (Colombian President Juan Manuel Santos appears to have convinced Chávez to agree to stop opposing Honduras’ return to the Organization of American States if Lobo allowed Zelaya back into the country.) “Lobo is following in Zelaya’s footsteps by becoming friends with Chávez,” said Fernando Anduray of the Unión Cívica Democrática, referring to Venezuela’s President. Anduray’s party supported the June 2009 coup.

The OAS plans to vote on Honduras’ reinstatement in an extraordinary meeting of the General Assembly in Washington on Wednesday.

The Biggest Mistake that Honduras as created is the Return of a Dictador and a Chavezist follower. Nicaragua is gone to the same toilet od Communist, Dictatorship, Crimes and know Honduras!! Hey Thanks USA!!

[…] Mel Zelaya is back in Honduras, flying in a Venezuelan airplane, and promises to re-enter politics: Wearing his trademark cowboy hat, Zelaya exited the plane flanked on both sides by some of Latin […]

[…] his trademark cowboy hat, landed at Toncontin International Airport in Tegucigalpa, where he was greeted by thousands of adoring supporters. Zelaya exited the aircraft flanked on both sides by some of Latin […]

[…] former President Manuel Zelaya was ousted and expelled from the country by the Honduran military. Zelaya was allowed to return — although not as president — last week to Tegucigalpa in a deal negotiated by […]

[…] Zelaya returned Saturday to Honduras from 16 months in exile after charges brought against him during the coup were dropped. Zelaya, who is still a popular figure in Honduras, plans to reenter the political arena. […]