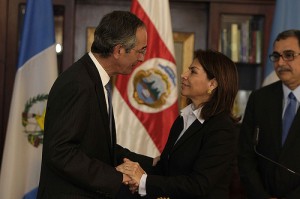 The presidents of Costa Rica and Guatemala rejected Sunday a recommendation from a committee of former Latin American presidents to legalize “soft” drugs in an effort to help mitigate violence caused by organized crime in Central America.

Costa Rican President Laura Chinchilla and her Guatemalan counterpart Álvaro Colom met over the weekend for a brief conference in San José, where they agreed that last week’s proposal by the Commission on Global Drug Policy to decriminalize substances like marijuana would not work.

“It seems very naive to say: legalize marijuana and the profits will fall,” Chinchilla said during a press conference after receiving the Guatemalan president in her office. Both president’s said that the United States and Europe need to take more responsibility in combating drug trafficking and provide more financial support to Central America.

Chinchilla also said that if “soft” drugs were legalized, the markets for harder substances such as cocaine and heroin would expand.

The Global Commission Drug Policy, which includes former presidents Ernesto Zedillo of Mexico, César Gaviria of Colombia and Brazil’s Fernando Henrique Cardoso, said during a meeting last Thursday that countries around the world need to explore the possibility of regular marijuana use and create treatment centers for hard drugs similar to the ones in Europe.

The committee added that the war on drugs, based on filling prisons with drug traffickers, has failed and that smarter alternatives are needed to address the problem.

“I think all presidents are tempted to legalize drugs so that once and for all we will be left in peace from all this violence, but do not think that is the right way,” Colom said of the committee’s recommendations, according to Costa Rica’s La Nación.

Colom also added that plans to combat drug trafficking like the Mérida Initiative and Plan Colombia have led to the displacement of criminal groups into Central America, and increased crime and violence in the area.

These issues will be worked into 14 specific programs and will include a proposal for funding from large drug-consuming countries like the U.S.

“Both president’s said that the United States and Europe need to take more responsibility in combating drug trafficking and provide more financial support to Central America.”

Yes, provide them more money so they can continue to play lip service to fighting the drug problem while drug cartels and gangs move billions of dollars worth of drugs through their countries on the way to the USA. The US government could quadruple anti-drug funding for these countries and it wouldn’t make a bit of difference in the amount of drugs that come into the US. The demand will be met.

While it’s not in this article, Chinchilla also said that legalizing marijuana would not do any good because drug traffickers would just focus on drugs like cocaine and heroin and use of those drugs would go up. She does not understand supply and demand. There is very limited demand for those drugs. Not only that, but 80% of illegal drug users in the US use marijuana, and most don’t use any other illegal drugs. The black market for drugs in the US is mostly a black market for marijuana, but the other drugs she talks about are all supplied my the same people. Marijuana consumers buy their marijuana from the same black market where these other drugs are sold. Most of the millions of US marijuana smokers would never even be exposed to drugs like cocaine, methamphetamine or heroin if they weren’t buying their marijuana from drug dealers. Legalizing marijuana in the US would probably reduce the use of these other drugs.

The same would occur in Central American nations if they were to legalize marijuana and allow it to be sold from licensed shops. But, if the US doesn’t legalize then Guatemala will still grow a lot of marijuana for US consumption. Both Guatemala and Costa Rica would still be transhipment states for cocaine as well. Mexican drug cartels would suffer greatly if the US were to legalize marijuana as they make the lion’s share of their profits from marijuana sold in the US. and the vast distribution networks for marijuana make perfect conduits through which to move their other drugs. Legalizing marijuana would strip them of the many billions they make selling marijuana in the us (that they grow in Mexico, Guatemala and the US), and it would make it harder for them to get their methamphetamine, heroin, and the cocaine they obtain from South America to end consumers in the US as many millins of participants in the black market for drugs will no longer be there to offer these other drugs to when they are looking for marijuana.

Two more puppets of United States law enforcement. Thy are taking money from U.S. government and turning on their own citizens They have learned well the hypocrisy from their neighbors to the North. They should resist any pressure from outside forces and be tried for treason for taking U.S. bribes

Legalization will allow ANYONE to grow their own, which means there will be NO criminals selling it. Anyone with a brain can figure this out on their own. When it is illegal or “decriminalized”, criminals will still be involved because it has massive value. Once everything is legal, the value drops dramatically, which means everyone can grow it in their backyards if they so choose. Wakeup people, these things will be used whether they are illegal or not. So why waste money putting people in jail over things they will use anyways. So dumb.