Supporters of Ollanta Humala during a march. 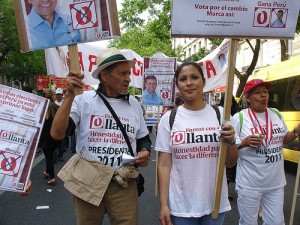 Supporters of Ollanta Humala during a march.

Top Story — Leftwing nationalist Ollanta Humala held a very narrow lead as of late Sunday night over conservative Keiko Fujimori in Peru’s runoff presidential election, according to exit polls. Though official results have yet to be announced, the Peruvian press is referring to him as “virtually” elected.

“The electoral results indicate — both rapid count and information offered by the ONPE (Peru’s electoral authority) — that we’ve won the presidential election,” Humala said in a press conference. “However, we’ll continue following the news until the official confirmation of the results.”

Transparencia, an independent organization observing the election, said in a press conference Sunday night that Humala led the race by 3 percent.

The majority of the votes counted so far come from urban polling stations, however. Humala enjoys more support that Fujimori in rural areas, so he is likely to pull ahead as the tally continues.

Chilean President Sebastián Piñera went ahead and called Humala Sunday night to congratulate him, though the official results had yet to be confirmed.

Humala’s election brings some uncertainty to the future of Peru’s economic model, which has followed free-market policies since the era of Alberto Fujimori, the country’s authoritarian president, who is now serving time for human rights abuses and corruption. Humala says he favors a greater role for the state in Peru’s economy, but he also says he will respect existing trade agreements negotiated by the outgoing administration of Alan García, including a free trade agreement with the United States.

Some observers, however, are not convinced that Peru will hold tight to its pro-market policies under Humala, who has yet to completely shed the far-leftist image he cultivated during a failed 2006 presidential bid. “There is really no reason for an investor to be hopeful. My sense is that the market, investors and the like will be on defensive,” Alberto Bernal of Bulltick Capital Markets in Miami told Reuters.

Spanish speakers can view a video of Humala’s remarks to the press Sunday evening after the release of the initial election results, courtesy of Peruvian daily El Comercio.