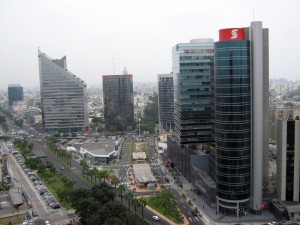 Mining companies took the biggest plunge, as investors worried that Humala may disrupt some $35 billion in investments over the next decade that current President Alan García has lined up in the sector. The currency and bond markets also dropped.

Investors were shaken by Humala’s reputation as a strident leftist, which he gained during a failed 2006 presidential bid. Humala has since moderated his politics and says he will increase taxes on foreign mining companies, but will not nationalize them.

Peru’s electoral authorities have yet to formally announce the winner of Sunday’s race, but his opponent, conservative Keiko Fujimori, conceded defeat on Monday.

“I recognize his triumph,” Fujimori said Monday, according to Bloomberg. “It’s important that the country continues its economic course and that it has clear rules.”

Fujmori went to visit Humala personally Monday evening at the Los Delfines Hotel in Lima to congratulate him.

The two may soon find each other at odds, however — Vice President-elect Omar Chehade says the new government is considering the possibility of moving Keiko Fujimori’s father Alberto to a regular prison, rather than the police station where he has been jailed in relatively comfortable conditions since 2008.

Alberto Fujimori, an authoritarian president who dissolved Congress in 1992, is serving time for human rights violations and corruption charges.

Humala’s party coalition Gana Peru announced the creation of a 20-person team to select a new cabinet and coordinate the government’s transition.