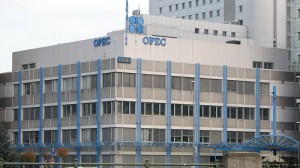 While the recent uprisings throughout the Middle East and the question whether to raise crude oil production are sure to take center stage at this week’s meeting of The Organization of Petroleum Exporting Countries (OPEC) in Vienna, Venezuela also plans to file a complaint over sanctions imposed by the United States against a state-run oil company  for its dealings with Iran.

Venezuelan Minister of Energy and Petroleum Rafael Ramírez confirmed Monday that he would file a complaint with OPEC over the sanctions imposed by the U.S. on the state-run Petróleos de Venezuela (PDVSA) oil company for allegedly violating the Iran Sanctions Act of 1996 by shipping some $50 million worth of a fuel additive to the country between December and March.

“We are going to file a complaint. We will explain (the situation). Sanctions against Venezuela for having relations with another OPEC country are unacceptable,” Ramírez said.

The sanctions now prohibit PDVSA from competing for U.S. government contracts, from getting financing from the Export-Import Bank of the United States and from obtaining U.S. export licenses. PDVSA can no longer offer fuel to the U.S. Strategic Petroleum Reserve – a role it has played in the past — and its exclusion from Export-Import Bank will boost financing costs.

“They are trying to intimidate us. We do not want a confrontation, but we do demand respect. We have the sovereign right to establish commercial relations with any country in the world,” Maduro said, according to the website of Venezuelan Embassy in the U.S. “We have the capacity and the logistics to commercialize PDVSA products in any market in the world, in Asia, Africa, or South America.”

At the OPEC meeting, the 12-nation group will discuss the possibility of increasing output levels to reduce international concerns about the high price of oil. Some members of the group are also looking to raise the cost of crude oil.

Iraq’s oil minister Abdul-Karim Elaibi said the price of between $100 and $120 a barrel is “reasonable” and that is at or above present prices, which is considered too high by major oil-consuming countries. Raising crude oil prices also goes against efforts by OPEC leader Saudi Arabia to push prices downward.

Ramírez said that it is unlikely that OPEC will raise production quotas, but admitted that the group would discuss the effect of output cuts in war-torn Libya.

“We have to wait to discuss the situation in the market, we believe at the moment we’re in balance,” he said.

The uprisings in Libya and Yemen threaten to destabilize larger oil-producing nations in the region. The two countries generally produce less than 4 percent of the world’s oil needs, but other OPEC countries have ramped up their output to make up for the shortfall in production.

Many OPEC member nations, as well as large oil consumers like the U.S and China, worry that the violence could spread to other nations and throw oil production into flux. OPEC is responsible for 40 percent of global oil supplies.

UPDATE: Venezuelan President Hugo Chávez said the U.S. imposed sanctions on PDVSA were an attack against his country.

“It is an attack of the U.S. empire on Venezuela. It is not against a small oil company, [PDVSA] is one of the largest oil companies in the world, and our country holds the largest proven oil reserves in the planet,”  Chávez said during a visit to Ecuador.

Never would have thunk I would find this so indisepnsalbe.