A redacted image of one of the leaked DAS documents. (Semana) 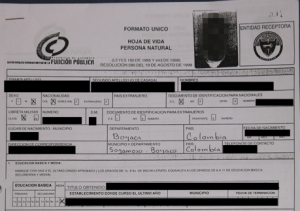 A redacted image of one of the leaked DAS documents. (Semana)

In a case that is inviting comparisons to WikiLeaks, Colombia’s intelligence service has lost control of an unprecedented amount of classified information, according to report by Semana. The magazine referred to the scandal as the largest intelligence leak in Colombia’s history.

“Ever since they told us the DAS would end, lots of people started doing business and looking for a way to make a few bucks. Others started pilfering information as a kind of insurance, in case one day there were ever a criminal investigation. It’s never been clear what will happen to us. The only thing they have told us all along is that this is over and we’re going to end up without a job,” a former DAS detective told Semana on condition of anonymity.

The magazine said that it has obtained tens of thousands of classified documents in several packages that include the names of every one of the 6,022 officials who worked for the DAS at the beginning of this year. The information includes the real names of secret agents who have infiltrated the Revolutionary Armed Forces of Colombia (FARC, in Spanish), a leftwing guerrilla army.

Colombia’s DAS was disgraced two years ago, after it was revealed that the agency had spied on the Supreme Court, opposition politicians, human rights groups and journalists. The new documents indicate that the illegal spying was even more widespread than previously suspected.

The Colombian press had already reported that an ex-detective from the DAS had organized an network of people to illegally spy on the Supreme Court and gather information about them. According to the filtered documents, the ex-detective — known in Colombia as “Mata Hari” — was not the only one. At least two other agents also organized clandestine networks to spy on the Supreme Court.

Other agents mentioned in the documents were charged with gathering information and presenting reports about politicians critical of the government, including then-Senator Germán Vargas Lleras, who currently serves as minister of the interior in the Juan Manuel Santos administration.

Semana reports that the classified information “is available on the streets” and says that the documents have reached the hands of the Daniel “El Loco” Barrera drug cartel, as well as an unnamed “foreign government that has had a tense relationship with Colombia in recent years.”

“Those who pilfer information put lives and national security at risk. We will find them and we will prosecute them,” DAS Director Felipe Muñoz told Semana.

The news of the massive intelligence leak comes just days after the former head of the DAS, Jorge Noguera, was sentenced to 25 years for collaborating with paramilitaries during his tenure as head of the DAS. He was found responsible for the 2004 murder of a sociologist.

[…] the agency’s employees began selling the agency’s classified documents, leading to the greatest intelligence leak in the country’s history, according to Colombian magazine Semana. While fear of unemployment reportedly prompted the leak, […]