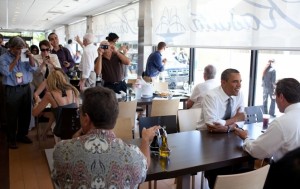 Top Story — Barack Obama became the first sitting U.S. president since since John F. Kennedy to visit Puerto Rico on Tuesday, fulfilling a promise he made back on the campaign trail in 2008.

Speaking during a welcome event at the Luis Muñoz Marin International Airport in San Juan, Obama highlighted the contributions that Puerto Ricans had made to the United States and promised to advance the debate about the island’s political status.

“In March, a report from our presidential task force on Puerto Rican status provided a meaningful way forward on this question so that the residents of the island can determine their own future,” Obama said during his speech. ” And when the people of Puerto Rico make a clear decision, my administration will stand by you.”

The president also addressed issues of education and healthcare, saying that these problems existed when Kennedy visited the island in 1961.

“We’ve been trying to make sure that every family on the island can find work and make a living and provide for their children. That’s why our economic plan and our health care reform included help for Puerto Rico,” he said, according to a White House transcript of his remarks. “We’re giving Puerto Ricans the tools they need to build their own economic futures.”

After his speech, Obama toured the streets of Old San Juan and stopped for a sandwich at a local restaurant.

While White House officials downplayed the political nature of the trip, Obama’s visit can be seen as a way to win over some of the four million Puerto Ricans who live on the U.S. mainland in the run-up to next year’s presidential campaign. Obama drew strong backing from Latino voters during his 2008 campaign, with 67 percent according to the Pew Hispanic Center, but support has wavered since due to his administration’s lack of action toward comprehensive immigration reform.

Puerto Rico is home to nearly four million U.S. citizens, but its residents are unable to vote in the general presidential election — only in the primaries.

Obama was scheduled to hold one campaign fundraiser during his visit and meet with Puerto Rico’s Republican Gov. Luis Fortuño.

“They were the swing voters in ’04, ’06, ’08 and they will do it again,” Fortuño said of the Puerto Rican vote. “They will look at the candidates and see what commitment they got, not just to the Puerto Rican community but to also the Hispanic community.”

One place where the Puerto Rican vote will play a decisive roll in next year’s election is Florida. The state is home to more than 840,000 Puerto Ricans and is not as Democratic as the Northeast, another Puerto Rican stronghold.

“This is all about Florida where the Puerto Rican vote is not nearly as Democratic as it is in the Northeast. It’s turned into a swing vote,” University of Virginia’s Larry Sabato told Fox News. “Puerto Ricans living in Florida… could very easily tip that state one way or the other in 2012, that’s what this trip is really about.”