New York City Mayor Micahel Bloomberg compared the lack of immigration reform in the U.S. to a "national suicide." 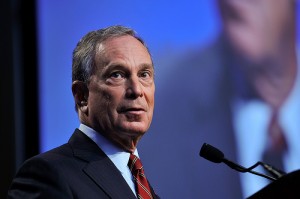 New York City Mayor Micahel Bloomberg compared the lack of immigration reform in the U.S. to a "national suicide."

Speaking at the Council of Foreign Relations, Bloomberg said that the country risks “national suicide” if it doesn’t adopt an immigration policy that is more welcoming to immigrants.

“We will not remain a global superpower if we continue to close our doors to people who want to come here to work hard, start businesses, and pursue the American dream,” Bloomberg said, according to Politico. “The American dream cannot survive if we keep telling the dreamers to go elsewhere,” the mayor adds. “It’s what I call national suicide – and that’s not hyperbole.”

A staunch advocate for easing visa and citizen requirements for foreign students and entrepreneurs in the U.S., Bloomberg’s remarks come at a time when the immigration debate is once again heating up. Last week Alabama passed a controversial immigration law similar to the one in place in Arizona and last month Bloomberg advocated allowing immigrants to come to the U.S. as long as they moved to Detroit.

Bloomberg’s speech comes as the Partnership for a New American Economy released a report looking at the role that immigrants play at Fortune 500 companies. The study by the bipartisan group, which Bloomberg co-chairs and includes business leaders like Rupert Murdoch, said that forty percent of Fortune 500 companies were founded by immigrants or the children of immigrants.

“American companies founded by immigrants or their children have revenues that are greater than the gross national product of every country in the world outside the United States, except two: China and Japan,” Bloomberg said in his prepared remarks.

“The reason is simple,” he added. “Immigrants are dreamers and risk-takers who are driven to succeed, because they know that in America hard work and talent are rewarded like nowhere else.”

The immigration debate in Congress seems to be at standstill as Democrats argue for the passing of the so-called Dream Act, which would allow minors who were brought to the U.S. illegally a path to citizenship provided they go to college or serve in the military. Republicans, such as Senator Jeff Sessions of Alabama say the legislation is a form of amnesty and offers a safe harbor to some undocumented immigrants with criminal records.

“Maybe more than any other major issue in Washington today, there is an opportunity for a bipartisan breakthrough on immigration,” Bloomberg said.

Last week New York City council members and leaders of New York City’s immigrant communities rallied at City Hall to save the Immigrant Opportunities Initiative (IOI), a city-funded measure that supports English language education, citizenship and legal services for immigrants. The IOI is currently under threat of being left out of New York City’s budget.

All those politicians, Governors, Mayors and other city managers and town councilors who are mimicking being for the American worker or population, but instead are surreptitiously implicated in open borders for financial gain or more vote power. Government advocates better be aware that the National TEA PARTY and the thousands of branches reunite everyone against those foes, who will be facing redundancy and drudging the streets. There is no doubt in my mind, that there will be a change of administration in 2012. All those following President Obama will be out of office, as the masses of ordinary US citizens and residents are perturbed with the incessant spending on illegal aliens.

It is a Great idea of Georgia’s lawmakers to place parolee’s and to consider low flight risk prison inmates, in assisting farmers picking crops and vegetables. Pay them for a job well done, as it will conserve considerable amounts of money, seeing that the penal system already has a responsibility to furnish Health care and educational programs. Those inmates who work diligently in the fields, should be given a special incentive, such as for everyday employed on a farm, they should get an extra day knocked of their original punishment? Eventually billions of dollars would be saved, as the taxpayer is already paying for illegal alien workers and supporting their Public welfare. We could introduce a program parallel to this in every state, especially in California and Nevada crippled by prison and jail costs?

THE PASSAGE OF ANTI-SANCTUARY CITY LAWS IN TEXAS, IS ANOTHER HIT AGAINST THE LIBS & DEMOCRATS, DISPLAYING THE WAY OF OTHER STATES TO COMBAT ILLEGAL IMMIGRATION. ARIZONA WAS THE WELLSPRING OF THE AMERICAN PEOPLES MOVEMENT FOR LESS INTERFERENCE FROM OUR GOVERNMENT AND RETURNING POWER TO THE STATES. STATE LEADERS, WHO FAIL TO SEE THE WRITING ON THE WALL, WILL FIND HUNDREDS OF THOUSANDS ECONOMIC ILLEGAL ALIENS HEADING FOR THEIR BORDER. IN THE COMING MONTHS THESE LAWMAKERS WILL BE JUDGED ON THEIR PERFORMANCE ON FINDING JOBS FOR THEIR CONSTITUENTS AND FOR REFUSING TO ENACT HARSH POLICING LAWS TO START THE PROCESS OF SELF-DEPORTATION OF FOREIGN NATIONALS. WE MUST SECURE THE BORDER NOW WITH TROOPS AND BRING TO THE ATTENTION OF THE HUNDREDS OF BILLIONS OF DOLLARS, TO PACIFY ILLEGAL ALIENS EACH YEAR IN COSTS THAT ARE FOREVER INCREASING.

The next pointer towards on halting the illegal alien invaders is to call your Federal and State Senator at the Senate—202-224–3121/ House—202-225–3121 as large numbers of TEA PARTY members are now doing. They are insisting that Congress enact permanent E-Verify, Secure Communities and 287G policing laws for businesses and law enforcement precincts. If you are really interested in your children’s future, read the facts about illegal immigration that the left hide from sight at NumbersUSA, Federation of American Immigration Reform and Judicial Watch, just to name a few organizations. Only the American people can stop us sinking further into this financial sinkhole, by ignoring the Liberal Progressives idea of Open borders; without any enforcement restraints that would destroy America’s individual sovereignty. If New York City Mayor Michael Bloomberg is right in his assumption that immigrants would generate $4. 2 trillion dollars, where is it up to now? We owe China a portion on the 14.5 trillion dollars, thanks to the political elites and poorly negotiated so-called FREE TRADE AGREEMENTS. The only winners in these trade treaties are greedy importers of poorly made goods. The profiteers have sold us out to cheap labor countries and sold every man, women and child for decades to come. Immigration can work, but only for the profession people with exception skills; but under control and not giving entry visas to medium skilled persons. America has a wealth of the greatest innovators in history, but we should and must close the door to economic illegal immigrants, adding to the overwhelming poverty amongst our own?

If these all-encompassing laws are mandated, illegal immigrants will not be able to work or risk being caught under the above mentioned countrywide laws. Undocumented people will begin to accept there is no place for them in America anymore. Further, the Republicans are correct that illegal entrance through borders, by plane or ship is a criminal offense. The laws should be changed for trespassing in any US State as a–FELONY. Any prudent American or legal resident can distinguish that we can no longer afford, to support Sanctuary Cities and states, that we must change the instant citizenship baby law, as monetarily subsidizing the lives of 300.000 annually of foreign children with parents who illegally entered this country. School classrooms through K-12 are overcrowded with the children of illegal immigrants and the hospital and clinics are overrun with foreigners; not for emergency treatment, but for minor medical care.

Over the past twenty years our own population is in anguish, under this occupational bombardment which is truly unfair to our own low income people. And even considering the thought of giving some form of legitimizing 20 plus illegal aliens, when the analytical think tank of the Heritage Foundation has projected it would cost taxpayers 2.6 Trillion dollars. To reiterate that the 1986 Amnesty package cost $76 Billion dollars, that was abused by business and most politicians after its enactment. Coming to America is reducing the opportunity of our own impoverished people that this recession has seen, with illegal workers skirting the laws and the federal government. Politicians are giving blind eye to the estimated 46 billion dollars wired out this nation annually to foreign banks. The TEA PARTY will embody the American people, not cooperating with big business influence, nor the open border fanatics, nor special interest lobbyists, just persons who came to the US legally.

Find a TEA PARTY near you, that will stop the evaporation of Medicare for Seniors, the massive tax burden; bringing to a close illegal aliens feeding of welfare programs, through their offspring. I was originally adverse to a National ID card as in the European United Communities, but I am on a different wavelength today. A national ID card would protect all birthright Americans, naturalized citizens and permanent residents from the corruption and abuse, which is transforming America into a third world country. We must control the influx of economic illegal aliens as its becoming unbearable on average Americans taxes, costing more than the two war fronts.

[…] Bloomberg Says No Immigration Reform Is "National Suicide"Latin America News DispatchThe next pointer towards on halting the illegal alien invaders is to call your Federal and State Senator at the Senate?202-224?3121/ House?202-225?3121 as large numbers of TEA PARTY members are now doing. They are insisting that Congress enact …and more » […]

The economic argument that Mayor Bloomberg uses is sound and reasonable–however, it can barely be heard above the deafening noise of bigotry and ignorance.

Bloomberg is right. Now is the most important time to pass immigration reform. Economists predict in 9 years we will not be the 1st super power. We need to tax these immigrants. We need to legalize them for their tax.