The city of Monterrey, Mexico. 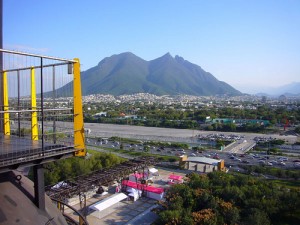 The city of Monterrey, Mexico.

Top Story — Violence from Mexico’s drug war continued to plague Monterrey this week as two bodyguards of the governor of Nuevo León were found dead Wednesday in the city’s streets along with a threatening message.

The bodies were wrapped in sheets and left near a supermarket in Guadalupe, a suburb of Mexico’s richest city. The Nuevo León state government confirmed the deaths but did not give more details.

“To Governor Rodrigo Medina, here are two of your bodyguards,” said a message left near the bodies. “Let’s see where the hell you can hide.” The note also said that the bodyguards had taken money from the Zetas drug cartel and said that Medina favored a rival drug cartel.

Medina, a member of the Institutional Revolutionary Party (PRI), has been pressed by citizens to put an end to the spiraling drug violence and he vowed to not give into the threats.

“Two members of government security assigned to me were killed in a cowardly way,” Medina said during a public event. “No threat will stop us from making Nuevo Leon safe.”

The killing of the two bodyguards came a day after two men were found dead and hanging by their hands off highway bridges near Monterrey.

A cosmopolitan city that is home to four million residents and considered one of the country’s industrial, intellectual and business strongholds, the violence in Monterrey has lead some to speculate that the fate of the Mexican state hinges on the city. Monterrey has become one of the main battleground in Mexico’s drug war since late 2009, when a rupture occurred between the Gulf Cartel and the Zetas.

“If we can’t deal with the problem in Monterrey, with all the resources and the people we have here, then that is a serious concern for the rest of Mexico,” said Javier Astaburuaga, chief financial officer at top Latin American drinks maker FEMSA, according to a Reuters report.

Since 2006, when Mexican President Felipe Calderón began the military battle against organized crime almost 40,000 people have been killed and thousands more disappeared.