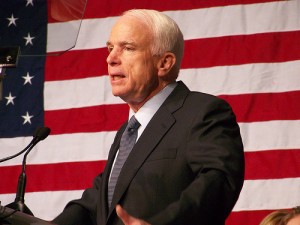 Republican Arizona Senator John McCain said that the state’s raging wildfires were started in part by undocumented immigrants, who light fires in the wilderness for warmth, to send signals and to distract border agents.

Speaking at a Phoenix news conference, McCain said that there is “substantial eveidence” that some of the fires were started by migrants making their way into the United States. While the senator did not give specifics, his fellow Republican Arizona senator, Jon Kyl, did refer to one blaze in May of 2010.

“There is substantial evidence that some of these fires have been caused by people who have crossed our border illegally,” McCain said. “The answer to that part of the problem is to get a secure border.”

However, Berglund did add that the cause of the Wallow fire, now the largest wildfire in Arizona history, was caused by humans – particullary from an “escaped campfire” – and that two people were being questioned, but no arrests were made.

Arizona Governor Jan Brewer said last week that the sources of two fires raging in southern Arizona were under investigation. The Wallow blaze has consumed nearly 800 square miles of land, while the Monument fire has driven thousands of people from their homes.

Latino groups denounced McCain’s statement and said that people  in Arizona are just looking for somebody to blame.

“It’s easier to fan the flames of intolerance, especially in Arizona,” said Randy Parraz, a civil rights activist, according to the Daily Mail newspaper.