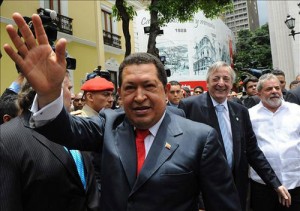 The footage, which is dated June 28, shows Chávez dressed in a tracksuit and laughing with Castro. The video features no sound except folkloric music in the background.

“Let these images serve to bring peace to the people of Venezuela regarding the health of President Chávez,” Communications Minister Andres Izarra said on state TV. “To those of you who speculating over the president’s health, there he is … President Chávez is fine, recovering well.”

Chávez’s long absence from Venezuela after his June 10 surgery in Havana to remove an abscess in his pelvis have led some to speculate on his health and his chances of returning to power in the Andean nation. Venezuelan journalist Nelson Bocaranda reported that Chávez might have prostate cancer and U.S.-based think-tank Stratfor quoted a source near to Chavez’s doctors claiming a tumor in his prostate required surgery in May and then spread to his pelvis.

It was reported on Tuesday that Chávez had slipped into a coma, according to The Miami Herald

Venezuelan state officials, however, are sticking to the script and claim that the socialist leader is recovering well from his surgery. One reason that Chávez might not yet want to return to Venezuela is that the ever-media conscious leader does not want to appear sick or weakened in public.

Chávez faces growing unrest at home due to a number of domestic problems such as electricity blackouts, crime, high prices, prison riots and shortages of some goods. Venezuela holds its presidential elections next year and Chávez’s sickness could weigh heavily on the minds of voters.

Since coming into power in 1999, Chávez has prided himself on portraying the image of a hearty and robust former military leader. His sickness would not only give a boost to opposition parties, but also create tension within his own United Socialist Party (PSUV) as members jostle for control.

One possible successor for Chávez is his older brother, Adán Chávez, the governor of the western state of Barinas and former Venezuelan ambassador to Cuba. The elder Chávez has taken up the role of providing public updates on his younger brother and serves a role similar to what Cuba’s  Raúl Castro did before he took office from Fidel.

If Chávez is unable to continue as president, Venezuelan Vice President Elias Jaua would take over for the rest of the six-year period under Article 233 of the constitution.

To view images of the meeting between Chávez and Castro, visit the website of Cuban state-run newspaper Granma. 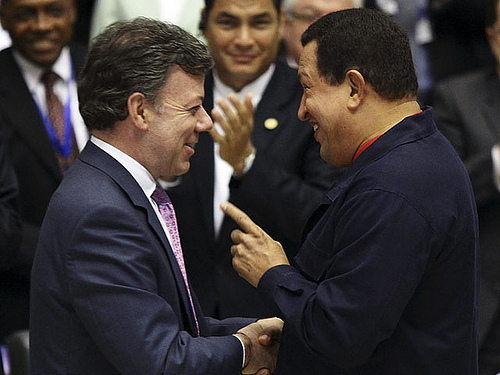