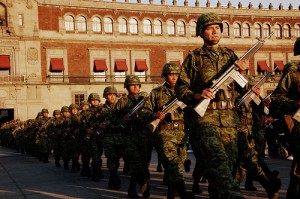 In a policy shift that could end in even more bloodshed, the Mexican government remodeled its anti-drug strategy to direct added attention to the violent Zetas paramilitary cartel.

News of the shift comes just weeks after an escalation in battles between the Zetas and members of the Mexican Armed Forces. The battles, which targeted “senior Zetas leaders,” according to a U.S. law enforcement official who spoke on the condition of anonymity, have led to the death or arrest of many members of the Zetas and have weakened one of the most feared cartels in Mexico.

On Monday, Mexican authorities announced the arrest of Jesús Enrique Rejón Aguilar, the alleged co-founder and third-in-command of the Zetas. Rejón is also believed to be involved in the killing of U.S. Immigration and Customs Enforcement (ICE) agent Jaime Zapata back in February and the U.S. had offered a $5 million reward for information leading to his arrest.

The Zetas formed in the late 1990s as a paramilitary, enforcer wing of the Gulf Cartel. Made up of former members and deserters of the Mexican Army Special Forces, the group carried out assassinations for Gulf Cartel leader Osiel Cárdenas Guillén.

The group later broke away from the Gulf Cartel and in 2010 started a bloody turf war for control of drug shipment routes in the border city of Reynosa. The Zetas are known for their use of brutality and shock tactics, such as beheadings and petrol bombs, and the U.S. Drug Enforcement Administration (DEA) said they were “the most technologically advanced, sophisticated and violent of these paramilitary enforcement groups.”

A U.S. law enforcement official confirmed Mexico’s shift in strategy and added that the U.S. was only playing a small role in the operation, limited to sharing ” reliable intelligence” with its Mexican counterparts.

Over the past weekend, officials in the U.S. state of Texas warned U.S. citizens not to travel to the Mexican city of Nuevo Laredo because they claimed to have “credible intelligence” that the Zetas were targeting U.S. citizens in the area. “We urge US citizens to avoid travel to Nuevo Laredo this weekend if it can be avoided,” said Steven McCraw, the director of the Texas Department of Public Safety.

A Mexican official downplayed the country’s shift toward confronting the Zetas and said that the government continues to look at targets in all the country’s criminal groups. The Mexican intelligence official, also speaking on the condition of anonymity, did add that the country has upped pressure on the Zetas.

A security expert at the Woodrow Wilson Center for Scholars in Washington D.C. praised Mexico’s move.

“Given the extreme levels of violence attributed to the Zetas, it would make sense for the government to focus its attention and resources on this particular group,” said Eric Olson of the Woodrow Wilson Center. “They may not be the most powerful or richest of the cartels, but they are amongst the bloodiest and are extending their reach from their base in the north and along the entire Mexican Gulf and into Central America.”

Since 2006, when Mexican President Felipe Calderón began the military battle against organized crime, almost 40,000 people have been killed and thousands more disappeared.