Colombian President Juan Manuel Santos during an October press conference in which he addressed the delays in reaching a peace agreement. (Image: César Carrión, Government of Colombia)

BOGOTÁ, Colombia — The ongoing peace talks between the Colombian government and the Revolutionary Armed Forces of Colombia, or FARC, could end more than 50 years of internal armed conflict. But they have not gone without a hitch. Despite some progress, tensions have been escalating in the last several months, threatening to bring negotiations to a halt.

The government and the FARC have made strides in moving to a de-escalation of the conflict in recent months: the rebel group declared an indefinite unilateral ceasefire in December; in March, Colombian President Juan Manuel Santos ordered the armed forces to halt air bombings on FARC camps for a month, then extended the suspension for another month in recognition of the rebel group having somewhat respected the terms of the ceasefire; and both parties agreed to work together to remove land mines planted by rebels in Colombia, the country with the second-highest rate of death or injury by land mines after Afghanistan. 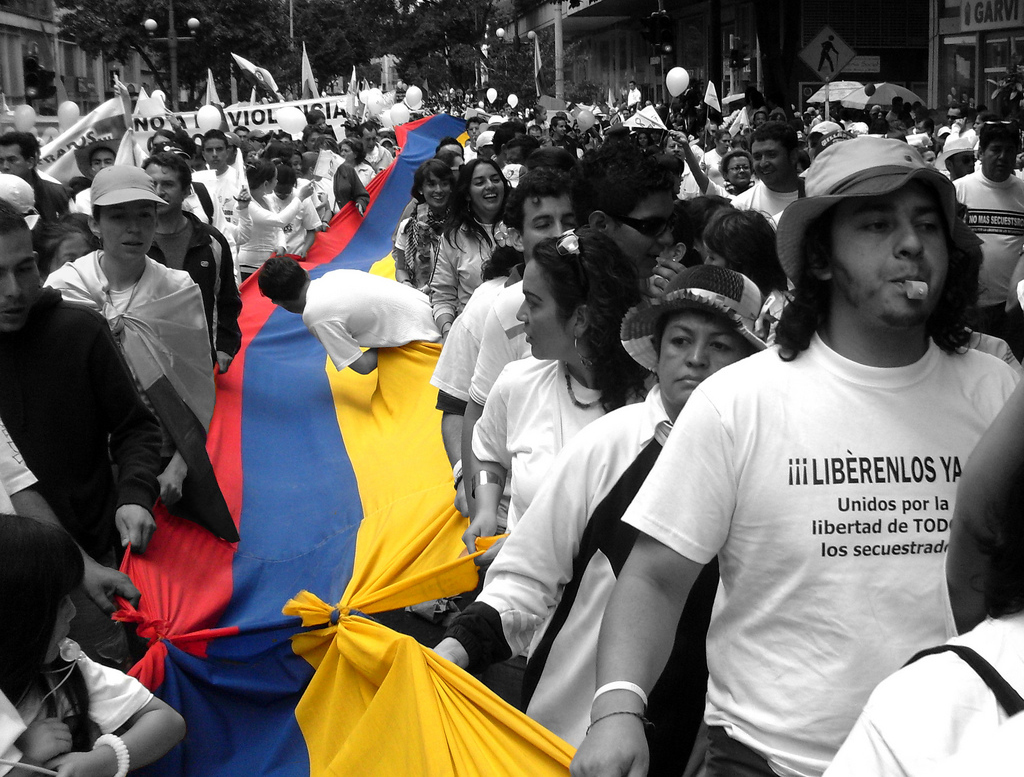 2008 demonstration in protest of the FARC and ELN rebel groups. (Image: Marco Suárez, CC BY 2.0)

During the five-month ceasefire, the country saw a historic 85 percent reduction of violence in war zones — lows not seen since 1984 — and a 73 percent drop in civilian killings, according to figures released by the Bogotá-based Conflict Analysis Resource Center.

But things changed in April. FARC rebels attacked an army mobile brigade in the southwestern department of Cauca, killing 11 soldiers. Although the ceasefire implemented in December had already been breached 21 times, according to the Conflict Analysis Resource Center, the Cauca attack represented the most violent violation of the truce.

Following the raid, Santos ordered the armed forces to lift the suspension of bombings on FARC camps. This meant the renewal of state military operations.

On May 21, Colombian armed forces attacked a FARC camp in the Guapi municipality in Cauca, killing 27 guerrilla members. Following the military operation, the rebel group announced the suspension of the unilateral ceasefire.

As expected, military offensives as well as attacks by FARC rebels resumed in several regions throughout the country, with many more expected to occur.

On the one hand, because by stepping up the number of the attacks — primarily on the country’s security forces and oil and energy infrastructure — the FARC seek to push the government to agree to a bilateral ceasefire, to prove their military power in the battlefield and strengthen their position at the negotiation table.

On the other hand, Santos has publicly refused to consider a truce without a final peace deal in place, and has claimed that the FARC’s attacks will not pressure him to make a decision on that matter. On the contrary, he has ordered the military to intensify its offensive against the FARC.

Although there is no certainty about how the new scenario will impact the course of the peace negotiations, it is clear that tensions in Colombia need to cool down if the talks are to succeed in Havana.

Tensions in Context: Negotiating Peace in the Midst of War 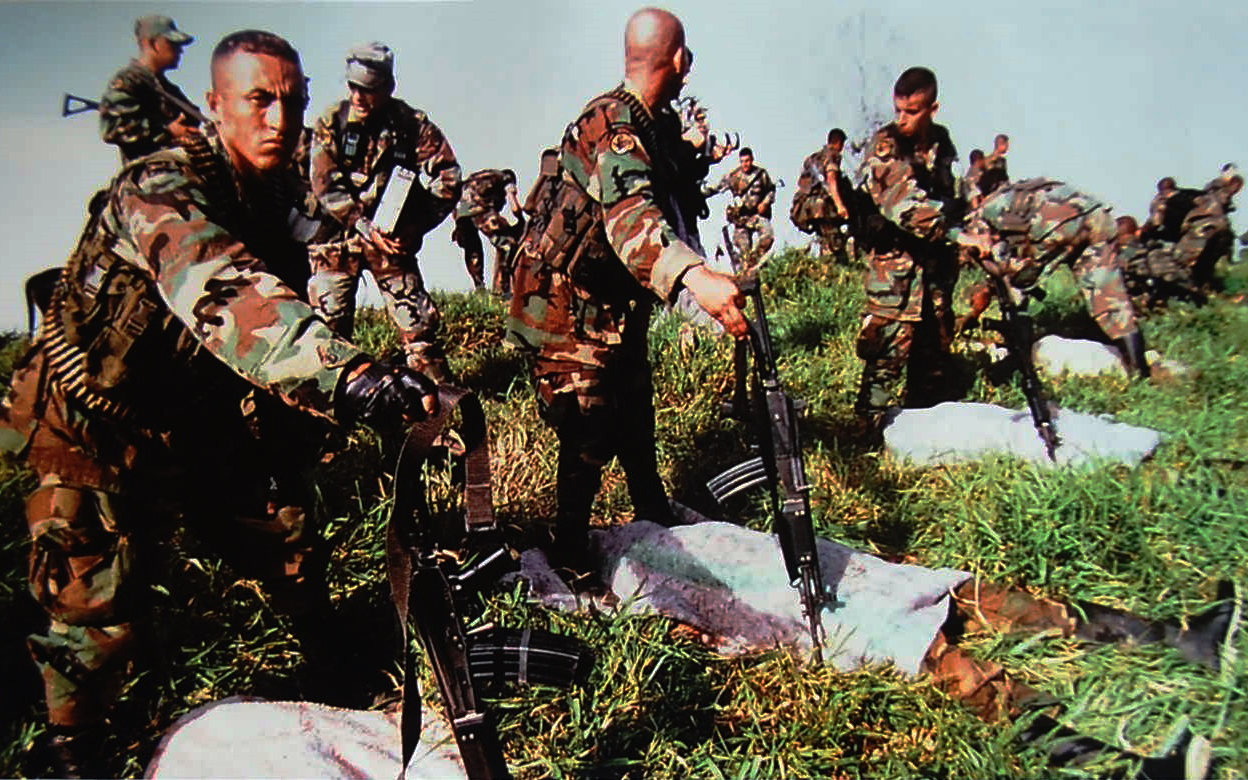 Soldiers from the IV Colombian Army Brigade pose with the remains of FARC members killed rural Campamento, in the municipality of Antioquia, in 2002. (Image: Fedayin17, CC BY-SA 4.0)

Colombia’s civil conflict began in the mid-1960s and continues into the present day. Since the government engaged in exploratory peace talks with the FARC in 2012, one of the premises ruling the current talks has been to negotiate peace in the middle of a war.

Although not an ideal context within which to negotiate for peace, it remains a key fact to understanding that a drop to zero levels of violence, the total eradication of all forms of action linked to the decades-long armed conflict and the rapid agreement on thorny issues, are all quite unlikely.

Also, this means that both parties have to negotiate a deal in Havana separately from what happens in the battlefield in Colombia. While last year Santos suspended the peace talks following the abduction of the Army General Rubén Darío Alzate along with two companions in western department of Chocó, the negotiations have continued in spite of FARC recent attacks and amid criticism of the peace process from opposition sectors.

Another issue to keep in mind is Colombia’s robust illicit drug trade. In the recent past, rebel groups have moved into drug production and distribution to finance their operations. It remains to be seen whether individual units of the FARC will move towards becoming criminal organizations once a peace deal is signed.

Miller Perdomo Mobile Column, the guerrilla unit responsible for April’s attack, reportedly operates in the north of Cauca and the south of Valle del Cauca departments, in the country’s Pacific coastline — a strategic area for the rebels’ finances. The column is reportedly involved in extortion, protecting marijuana crops as well as the drug trafficking routes passing through Cauca to the Pacific ports and is known for being one of the mayor producers of irregular explosives in the country.

Although it remains unclear, according to The Economist, whether the order for the raid on the army in Cauca came from top commanders in Havana, it highlights the possibility that the FARC might not have complete control over all its units, particularly those that seem to have links to illegal activities and are not interested in demobilizing.

Likewise, a sector within the military might be spoiling the peace talks, according to the Washington Office on Latin America (WOLA) in a January analysis. The opposition coming from the military sector, which is likely concerned with issues related to the design of the peace process and its implications for the armed forces, could not only hinder the current negotiations but could also have negative repercussions in a post-conflict scenario, according to WOLA.

Lessons from the Past

This is not the first attempt at peace negotiations between the Colombian government and the FARC. Previous attempts to end the armed conflict have had varying success, but have all left important lessons behind.

During the most recent peace negotiations between 1998 and 2002, for instance, the government of then-President Andrés Pastrana cleared a demilitarized zone larger than Switzerland in south central Colombia for the FARC. While little progress was being made to meet the points of the peace agenda, the rebels were tactically using the area to launch attacks, hold hostages and expand the coca crops, while strengthening their military power and territorial expansion.

The negotiations finally broke down in 2002, with the image of the FARC heavily damaged. The rebel group showed that it had no intention to end the armed conflict, and rather took advantage of the territory to advance its own purposes.

This is why it has been so difficult to argue in favor of stopping all military actions against the FARC — the government fears that the fallout from the 1998-2002 peace negotiations will repeat itself.

In the current peace talks, the government has implemented lessons learned from past experiences, and some progress has been made, with three of the five points of the agenda having been agreed on so far. However, incidents as the one registered in Cauca, or partial commitments such as the one made in February, when the group announced it would not longer recruit minors under age of 17 — but did not agree to remove minors from the group’s ranks — have deepened the already deteriorated trust in the FARC, also harming the public’s confidence in the negotiations.

Giving security a political character has been a recurrent strategy used by politicians in Colombia to obtain votes and win elections, since it is one of the main problems facing the country. According to the 2014 Latin American Public Opinion Project report, the average perception of insecurity in Colombia increased from 37.2 percent in 2012 to 45.8 percent in 2014.

In the 2014 presidential campaign cycle, then-incumbent candidate Santos resorted to the tried-and-true strategy of politicizing security. The tactic worked — to a point. Santos insisted that he represented peace, and that his right-wing opponent Óscar Ivan Zuluaga, with his opposition to the the peace process, represented “an endless war.” His peace-or-war speech during the campaign won him votes, but also polarized public opinion around the peace process. Currently, it has hampered objective analysis of the peace talks, and has led to harsh criticism and politically biased assessments of the negotiations.

On the other hand, the use of peace as a political tactic usually creates enormous expectations, and a candidate’s promises are expected to be accomplished in a short period of time. When these expectations are not met, skepticism increases, and his or her approval rate drops in the polls — as has happened to Santos.

An April survey by Gallup showed that support for the negotiations dropped 17 points, from 69 percent to 52 percent, with 64 percent of those polled disapproving of Santos’s performance. A poll by Ipsos, also released in April, shows that 69 percent of those interviewed do not believe that the current round of negotiations will end with an agreement, while 81 percent believe the President has not delivered on his campaign. According to the Ipsos poll, Santos’s popularity dropped 11 points — from 40 in November to 29 percent in April.

What Does the Immediate Future Hold for the Peace Negotiations?

Colombia has been negotiating a peace agreement with the FARC since November 2012, in Havana, Cuba. At present, the negotiating delegations have decided to continue the peace talks, amid tensions and a fragmented public opinion that has pressured the government to accomplish opposing goals: speed up the peace process and settle a bilateral ceasefire or intensify the military operations.

The extent and targets of the attacks expected to be launched by the FARC in the next weeks or months are yet to be seen. The FARC, as mentioned, may not want to sabotage a potential peace deal. In fact, the violence employed by the group in the last several months can be seen as a message to the Santos administration that halting the peace process now would be costly. The future of the negotiations will largely depend on the magnitude of the attacks, the targets, the amount of violence deployed, and the patience of the Colombians — which is running out very quickly.

Santos has the huge task ahead of him of forging a consensus among the Colombian public and minimizing tensions at the negotiation tables. This will be crucial if the final agreement is to be put to a referendum and voted on by the Colombian people, as the government has publicly announced it intends to do — more so because the most sensitive issues, such as the kind of justice that will be applied to individuals and groups who committed human rights violations in the framework of the armed conflict, are yet to be addressed.

Although public support for the peace process is expected to further deteriorate with an expected flare-up of violence, the future of the negotiations will partly depend on how accurately the government, the FARC, the media and the public in general address the roots of half a century worth of tensions.