This article was originally published by Mongabay.

Ethnos360, an evangelical Christian missionary group, is embarking on a controversial new project, just as the coronavirus begins spreading widely in Brazil.

The organization, formerly known internationally as the New Tribes Mission, and based in Sanford, Florida, USA, plans to use a newly purchased aircraft to contact and convert isolated Amazon indigenous groups — even though such contact is banned explicitly by FUNAI, Brazil’s indigenous agency, and implicitly under the nation’s 1988 Constitution.

At the end of January, Edward Luz, president of New Tribes Mission of Brazil, announced the acquisition of the “Ethnos360 Aviation R66 helicopter,” able to operate in the remote rainforests of Western Brazil, and he told a small group of Christian evangelicals assembled in Rio de Janeiro, that: “God will do anything to see to it that mankind hears His Word. If a helicopter becomes necessary, He provides it.”

The “mankind” to whom Luz referred includes isolated Amazon indigenous groups. Brazil has 115 confirmed indications of such groups — more than any other country in the world. All but two are in the Amazon biome. Many are concentrated in the west of Brazil near the frontier with Peru, which is the area targeted by Ethnos360Aviation.

Spreading the Word of God, and disease

New Tribes Mission, established in 1942, has a long, checkered history in Brazil. One case concerns its contact with the Zo’é, an isolated indigenous group living in the remote Amazon rainforest of northern Pará state. By 1980, small-scale goldminers and Brazil nut collectors were already gradually penetrating their territory, but the Zo’é fled contact. Then, in 1982, New Tribes Mission learned of the group’s existence and started dropping “presents” from the air on their villages. In 1987, the missionaries established a base camp and airstrip on the edge of the Zo’é territory.

Over the next two years, evangelicals made several forays toward the Zo’é villages, making sporadic contact with the tribe, who, according to the missionaries, remained “restless” and “withdrawn.” The definitive contact came in November 1987, when a group of about 100 Zo’é appeared at the base camp. Communicating through gestures, the missionaries offered gifts, but in turn were handed broken arrows — a clear message that the indigenous delegation wanted the missionaries to leave.

FUNAI learned of these events and forbade the missionaries from installing themselves in the indigenous villages. Instead, missionaries tried to attract the Zo’é to their base outside of indigenous land. According to the Socioenvironmental Institute (ISA), a Brazilian NGO, the missionaries’ objective was to learn the Zo’é language so they could begin the literacy process, translating the Bible and thereby conveying the Word of the Lord to the group.

The Zo’é began to die rapidly from malaria and influenza — diseases to which they lacked Westerners’ resistance. In 1989, FUNAI visited the missionary base and was shocked at the poor state of indigenous health. Relations with the missionaries deteriorated and in 1991 FUNAI took over, forcing New Tribes Mission to leave.

It is estimated that 45 Zo’é died between 1987 and 1991. Their population, which fell to 133 in 1991, is recovering and is estimated at 250 today. But they remain vulnerable as a people to disease and the loss of their ancestral land to invading cattle ranchers and soy growers.

Another notorious outcome of New Tribes Mission’s work in Brazil includes the case of Warren Scott Kennell, who served as one of their missionaries between 2008 and 2011, living with the Katukina in western Amazonas state. Over several years, he built a trusting relationship with girls as young as 12, then sexually abused them. Tipped off about these crimes, U.S. Homeland Security stopped Kennell at the Orlando, Florida International Airport and found he possessed over 940 images of child pornography.

According to prosecutors, Kennell identified himself in one of the photos as the man performing a sex act on a prepubescent girl. “Kennell represents the worst kind of criminal; one that preys on innocent children,” Shane Folden, deputy special agent in charge of the Tampa office of the Department of Homeland Security, said in a statement. In 2014, Kennell was sentenced to 58 years in prison.

A plan whose time has come?

The boldness of Ethnos360’s helicopter-contact and conversion plan may not be as brazen as it first seems. In February, Brazil’s Jair Bolsonaro administration made a surprise appointment, putting Ricardo Lopez Dias in charge of The Coordination of Isolated and Recently Contacted Indians (CGIIRC), FUNAI’s most sensitive department. Dias, an anthropologist and evangelical, was a missionary for New Tribes Mission for over a decade, doing conversion work. 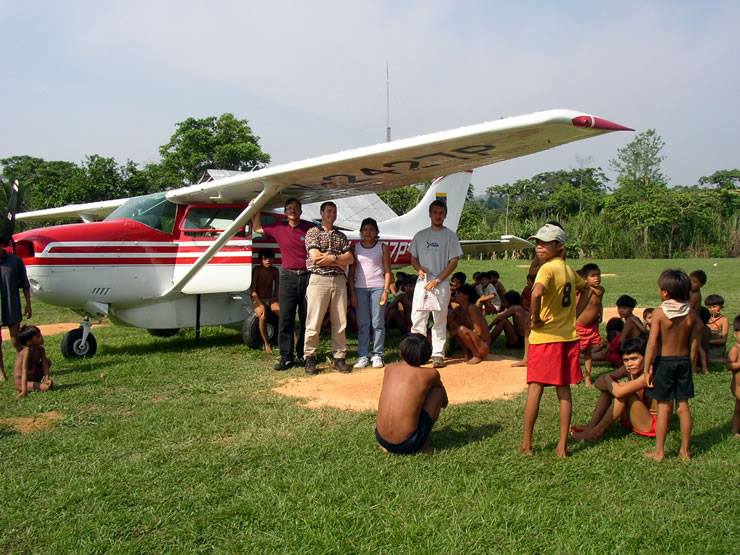 A New Tribes Mission Cessna 206 operating in Brazil in 2014. “Our people really need the airplane to be able to get technical help, linguistic help, translation help, even church-planting help and advice and encouragement into their tribe from time to time,” said Wonita Werley, spokesperson for NTM Aviation. Image taken from NTM press release.

In 2020, Epoca, the Brazilian news magazine, revealed that, starting in 2017, New Tribes Mission began circulating promotional videos, raising donations to pay for the R66 helicopter. In one clip pilot Jeremiah Diedrich explains why New Tribes Mission wants the aircraft: “This part of western Brazil is listed by Survival International, [an NGO], as having the highest concentration of uncontacted people-groups in the world … It is the darkest, densest, hardest-to-reach place in the whole of South America. This is why we need a helicopter.”

Survival International, itself, is vehemently opposed to the Ethnos360 initiative. Fiona Watson, Advocacy Director of Survival, told Mongabay: “The New Tribes Mission’s plan to use a helicopter to locate uncontacted tribes is dangerous and irresponsible.  They clearly have no intention of respecting these indigenous peoples’ clear desire to be left alone. Any attempt to force contact risks infecting them with deadly diseases. The NTM’s appalling history of forced contacts in South America in the last 60 years resulted in the death and destruction of many uncontacted peoples and should serve as a stark warning not to let them anywhere near these vulnerable tribes. The Brazilian government must act now to stop the NTM’s genocidal plans.”

If the New Tribes Mission plan goes forward, it will be in open defiance of an official Brazilian policy established three decades ago to respect the wishes of isolated Indians not wanting to be contacted. That policy was adopted by FUNAI after various instances of serious harm brought by forced contact, including the Zo’é case.

New Tribes Mission must certainly know that they will be violating Brazilian policy by using their helicopter to make unsolicited contact. In another video, Ethnos360 Program Manager Joel Rich refers indirectly to the measures taken by the Brazilian authorities to prevent outsiders moving onto land inhabited by uncontacted Indians: “Unfortunately, only a small fraction of travel trips are able to take advantage of [plane travel]. The remainder [of the villages] do not have an air strip because of government restrictions … We need a helicopter.”

FUNAI’s policies do not have the force of law in Brazil. But experts note that the New Tribes Mission contact and conversion plan likely violates the 1988 Brazilian Constitution, which discarded an earlier policy adopted under the nation’s military dictatorship that indigenous people be “assimilated.” Instead, the document gave native peoples the right to be indigenous forever.

Brazil also voted in favor of the United Nations Declaration on the Right of Indigenous Peoples in 2007. Although not legally binding, it is a landmark document which sets out some of the highest standards to which governments should adhere to uphold indigenous rights. Self-determination and territorial rights are at its core, while emphasizing that indigenous peoples have the right not to suffer forced assimilation and destruction of their culture.

Despite the law, it remains questionable as to whether government action against Ethnos360’s activities will be forthcoming. With Bolsonaro’s election, New Tribes Mission may feel that, after years of hostility from anthropologists, the tide has now turned hard in their favor. Bolsonaro is notorious for speaking of indigenous people living in the remote Amazon as animals in a zoo, and even suggesting that “It’s a shame the Brazilian cavalry [wasn’t] as efficient as the Americans, who exterminated the Indians.” Bolsonaro won office with overwhelming backing from Christian evangelicals and has since placed many in positions of power.

The appointment of Dias to FUNAI, say some experts, sends a signal that Brazil could be about to change its long-held policy on non-contact, even though Dias has repeatedly claimed that his past missionary work does not disqualify him from his new duties. “I understand there is a lot of apprehension regarding what the work of missionaries entails,” he said. “I don’t see this as a mission or an opportunity to find new converts. I have no interest in going there with a Bible in hand.”

But indigenous associations and advocates fear that Dias’ record suggests he might not act to stop missionary contact. Dias spent ten years (1997-2007) among the Matsés indigenous group in the Javari Valley of Amazonas state, working as a missionary for New Tribes Mission.

FUNAI’s career employees association recoiled at Dias’ appointment, calling it in an open letter, a dangerous move that will potentially result in “irreparable damage” to vulnerable isolated indigenous groups.

Even though New Tribes Mission recently changed their name, possibly to make a break with their controversial past, the group openly admits that their vision remains the same. Contacting isolated indigenous communities has been the organization’s prime raison d’être since its founding in 1942, when it set out to bring Christianity to the world’s most isolated communities, however difficult or dangerous it is to reach them.

The first issue of NTM’s official magazine, Brown Gold, published in May 1943, summarized their mission: “By unflinching determination we [will] hazard our lives and gamble all for Christ until we have reached the last tribe regardless of where that tribe might be.” Ethnos360 did not respond to Mongabay’s request for an interview.

In its statement, UNIVAJA expressed fear that, under Dias’s leadership, FUNAI’s CGIIRC could become the “spearhead” of an “ethnocidal and genocidal attack.” Ethnocide is defined as the destruction of a people’s culture. Indigenous groups in Brazil report that New Tribes Mission is already on the move; they say that Ethnos360 missionaries arrived in the Deni Indigenous Territory in Acre state in late February.

And the dangers are likely only becoming greater as the coronavirus pandemic takes hold in Brazil; the nation currently has 300+ confirmed cases. Bolsonaro, who until recently dismissed the pandemic as a “fantasy,” was reported last week to have tested positive for the virus, then negative, while several of his staff, including his press secretary, have either contracted COVID-19 or are under observation.

Douglas Rodrigues, with the Department of Preventive Medicine at the Federal University of São Paulo, who works with indigenous populations, has urgently warned of the dangers of coronavirus to isolated Indians: “Measles and chicken pox have killed Indians, but the great villains of this story have been respiratory illnesses and coronavirus is one more of these.”

With the rapid spread of COVID-19, Brazil’s under-funded health system will certainly struggle to cope — especially among remote Amazon indigenous peoples who feel deserted by the public health service under Bolsonaro. Isolated indigenous groups, vulnerable to Western diseases, if contacted by Ethnos360, will be at extreme risk.

This article was originally published on Mongabay and is republished here under Creative Commons. 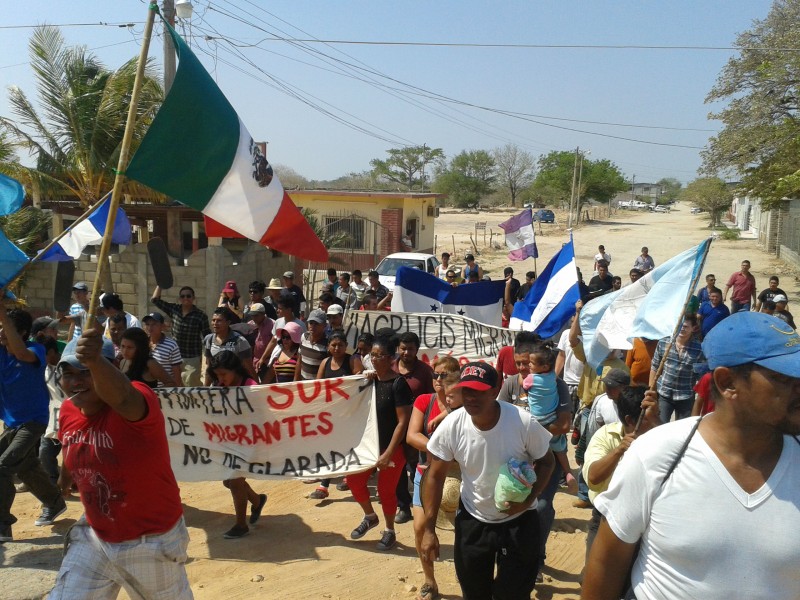 Colombia Advances LGBT Rights But Some Say It’s Not Enough