This story was published as part of Climate Tracker‘s Global Mentorship for Young Media Professionals.

Almost every inch of land is blanketed by fruits and vegetables has been taken: soursop trees, guava, banana, avocado… Mayté Pernús, a 31-year-old Cuban biologist, and her family consume fresh produce, even coffee, grown by themselves in their own backyard.

When the pandemic started to look worse, they also planted pepper, tomatoes, green beans, spices and medicinal herbs. “We thought: ‘This is going to get ugly, so let’s do something’,” Mayté said. In part, yes, they like gardening, but the main reason is because, at the time being, that’s the only way for them to get some of those products.

The remarkable difficulty in accessing food is one of the most visible consequences of the economic crisis caused by the COVID-19 pandemic in Cuba. Often, residents see a price rise, empty shelves and dozens of people forming queues to buy rationed products.

“During all these months we had home-made juice for breakfast,” Mayté said. “It has been a salvation; we can barely find fruits in the market.” 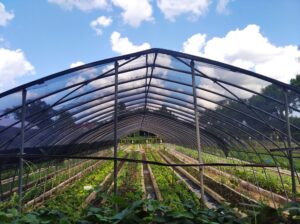 A new face for an old problem

Scarcity is an old problem in the island, which imports two thirds of the food it needs. Moreover, variable amounts of produce are lost every year due to disconnections along distribution chains.

In the midst of the pandemic, many people are growing vegetable patches in order to supply themselves with fresh provision. Indeed, some folks are even taking advantage of any available areas, like plots or even flowerbeds. President Miguel Díaz-Canel and Minister of Economy Alejandro Gil are encouraging citizens to do so, highlighting that Cubans will eat what they are able to produce.

“My mother has always had lots of plants, but in the context of coronavirus, I’m more engaged in that, and we have looked for edible options,” Havana resident Paola Hornedo stated. Flowers in her garden now share space with a lemon tree, scallions, ginger and turmeric. After she posted in Facebook photos of her cultivation, a friend offered her some spinach seeds, and someone else a passion fruit seedling.

Cubans left the countryside long ago. According to the 2014 census, the urban population in the island peaks at 76.8%. Hence, it’s crucial to bring agricultural products closer to the place where they are actually consumed. Transportation over long distances means higher prices for clients and increased use of fuel.

This issue proved to be critical a few weeks ago, when trucks carrying vegetables couldn’t reach Havana due to Covid-related movement restrictions.

Urban and family agriculture is tightly linked to organic farming because they arise in a context of shortage, according to Yarbredy Vázquez, economist and vice-director of the Center of Local and Community Development (CEDEL).

Actually, in the 90s, during the so-called “Special Period” – the economic crisis subsequent to the Soviet Union’s collapse –, there was also a rise of this movement. But once conditions got better, “organopónicos” (urban nurseries) faded again.

“There are plenty of agroecological experiences in the Caribbean and Central America from which we could learn from, but we need to create incentives,” Vázquez highlighted.

Héctor Díaz, Mayté’s husband and a biologist too, indicated that seeds are often difficult to find, as well as suitable trees’ varieties for patios and small surfaces. “Training in this regard is always needed, and also tools, good soil, products to fight plagues,” Paola added.

Despite how complicated circumstances look, this is a great opportunity to embrace urban agriculture as a sustainable and ecological source of food, rather than just a necessity. 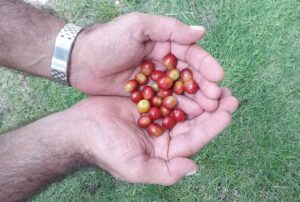 “This is not only for us,” Mayté said. “We share with neighbors and relatives that live elsewhere, while we also receive products from them. Here, nothing is for sale.” Frequently, vegetable gardens come with added value: they strengthen community bonds and boost a supportive economy.

One of the most outstanding initiatives in the city is Proyecto Akokán, based in the municipality of Marianao. Through their Solidarity Patios Network, they enhance local production of healthy food in 16 backyards, and they hope to reach 58 of those.

Crops satisfy the necessities of families that produce, and surpluses are exchanged between them, according to Michael Sánchez, coordinator of Akokán. Moreover, they share seeds and small plants to be sowed. Children and entrepreneurs are engaged as well in the work.

Likewise, the group of Young Agroecologists have a very active Facebook page. They carry out academic activities and spread knowledge and information, which has top importance for the movement. For Yarbredy Vázquez, agriculture is a culture.

Vegetable gardens are not exclusive to Cuba. They are spreading in Panama, Mexico City, Paris and New York. Debates and actions regarding self-sufficiency are back thanks to the pandemic.

Despite how much food urban vegetable patches could provide, some products, like soy and wheat, will still depend on imports. Nonetheless, there is a considerable potential to be exploited in every city across the country, and even more when taking into account restrictions due to the United States blockade to Cuba.

In order to fertilize the soil, Mayté and her family prepare compost using organic waste and fallen leaves from the backyard. “Maybe before the pandemic, some guava could rot away and we didn’t realize,” she said. But now, given the situation, we take advantage of everything.” Like in the wild, here everything is useful.