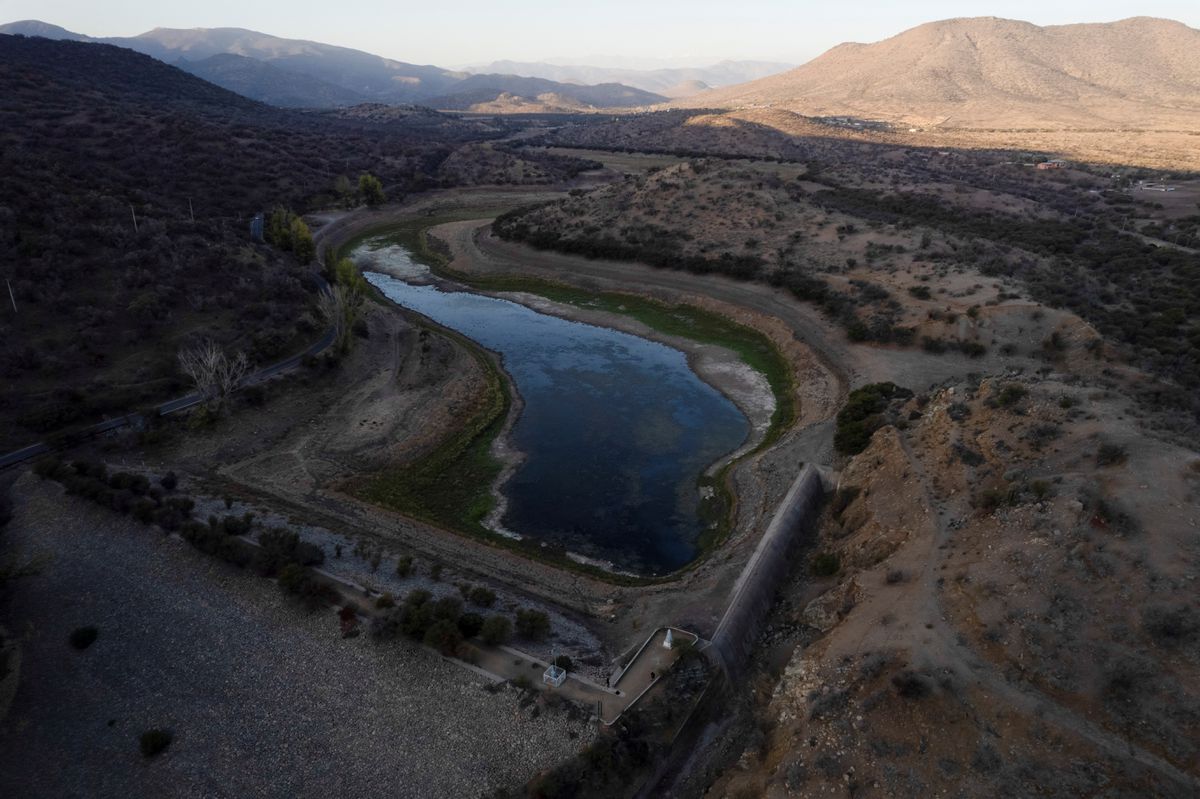 Aerial view of the Rungue reservoir during a drought in Rungue, north of Santiago, Chile, April 11, 2022. Drone photo by REUTERS/Pablo Sanhueza

CHILE: The Governor of the Metropolitan Region of Santiago last Monday announced a protocol for rationing water in the capital to address a record-breaking 12-year drought.

The protocol consists of a four-tier system, with the lowest alert level being green and the highest, red. A red alert would signal rotating cuts to the water supply across various sectors of the city for periods of no more than 24 hours each. These cuts could affect approximately 1.7 million clients in a city of more than 7 million residents.

Governor Claudio Orrega stated that although the likelihood of needing to ration the water supply during Chile’s upcoming winter months was low, he could not rule out the possibility of enacting the protocol at some point in the next 12 months.

Last year was Santiago’s fifth driest year in recorded history, according to statistics from Chile’s Meteorological Office. Experts have identified Chile as the country in the Western Hemisphere with the most severe water crisis.

ARGENTINA: Truckers ended a four-day strike on Thursday after reaching a deal with the government and other agroindustry stakeholders to raise rates to transport grains. After an almost four-hour-long meeting at the Ministry of Transport, all parties agreed on a 20% increase in transportation rates.

This increase follows an earlier raise in transportation rates that the Federation of Argentinian Transporters (FETRA) achieved at the beginning of February, citing an increase in fuel prices. At Thursday’s meeting, FETRA also sought assurances about the continuing availability of fuel.

COLOMBIA: Victims of captured drug kingpin Dario Antonio Úsuga, alias “Otoniel,” organized in Bogotá this week to protest his imminent extradition to the United States. Úsaga is expected to be transported to the United States within days to face drug trafficking charges in New York and Florida.

Wearing facemasks to safeguard their identity, victims of Úsaga argued that he should first answer to the hundreds of crimes and human rights violations he committed in Colombia. As head of the Gulf Clan Cartel, Úsaga trafficked 180 – 200 tons of cocaine a year and is responsible for the deaths of more than 200 members of Colombia’s security forces. Úsaga is also accused of homicide, terrorism, kidnapping, sex crimes, and the recruitment of minors.

PERU: Spanish aristocrat, Martín Cabello de los Cobos, and daughter of  Peruvian politician, Belén Barnechea, faced criticism for their April 9 wedding featuring dancers dressed as slaves simulating forced labor and women in indigenous dress posing on the ground. The bride spoke out on social media to defend the spectacle, stating that the wedding party, which took place in Trujillo, was misrepresented by the media.

On Thursday the Ministry of Culture denounced the “inappropriate use of our cultural diversity” through the public reinforcement of damaging “historical stereotypes.”

CUBA: Members of the United Nations on Wednesday elected Cuba to four bodies of the Economic and Social Council, including the Executive Board of UNICEF. The Caribbean nation was also elected to serve on the Commission on the Status of Women, the Commission on Science and Technology for Development, and the Committee on Non-Governmental Organizations.

A U.S. representative  “expressed concern” over Cuba’s election to the Committee on Non-Governmental Organizations, naming Cuba among governments that it deemed “hostile to civil society.”

In a tweet sharing the news of Cuba’s election to the four U.N. bodies, the Office of the President stated that the country was an “international referent” whose prestige grows “despite a cruel media campaign against it.”

JAMAICA: The Opposition on Thursday called the Government’s decision to remove COVID-19 testing requirements for travelers into Jamaica “ill-advised and reckless.” Prime Minister Andrew Holness announced on Wednesday that as of Friday, April 15, travelers to Jamaica would no longer be required to present a negative COVID-19 test before entering the country.

An Opposition spokesperson said that the countries from which Jamaica received the majority of its visitors are currently experiencing a new wave of COVID-19 driven by the Omicron sub-variant, BA2. He added that less than a quarter of Jamaica’s population is fully vaccinated against COVID-19.

Holness also announced that mask-wearing would no longer be required in indoor settings, but would still be encouraged. Opposition lawmakers also criticized this decision.

EL SALVADOR: Two hearings took place on Saturday, one with up to 150 people, to order the provisional detention of an estimated 4,000 people captured since the start of the government’s state of emergency, informed attorney general Rodolfo Delgado.

Ruth Eleonora López, director of anti-corruption at CRISTOSAL, a human rights organization, said that the accumulation of cases during the state of emergency placed civil due process guarantees at risk. Saturday’s hearings took place without many defense attorneys present.

President Nayib Bukele said that only 1% of those arrested, not tied to gangs, would be released. However, national police commanders have been pressuring officers to meet arrest quotas which adds to the accumulation of cases.

NICARAGUA: The government on Friday said that it would assume 100% of the cost increments to combustible prices until April 23. This is the second consecutive week that the government has absorbed increases in fuel costs.

In accordance with the new international price of petroleum, the increments should rise to 13.63 córdobas (USD 0.38) per gallon, but President Daniel Ortega decided not to increase the cost. This means that consumers will continue paying the same amount for super and regular gasoline, diesel, and liquified petroleum gas – used in many households – despite the projected rise in price.

MEXICO: Migrants from southernmost Mexico embarked on an Easter weekend caravan march on Saturday that quickly ended when Mexican authorities sent buses to give them a ride to the town of Huixtla, promising to expedite documents for them. Nearly 800 migrants mostly from Venezuela, Cuba, and Central America departed Tapachula carrying crosses.

The caravan only advanced 8 kilometers (five miles) before they were stopped by National Institute of Migration officials with whom they maintained dialogue and agreed to stop.

For several years, migrants have organized Holy Week marches in an effort to continue their northward journey to the U.S.

Last week, Abbott ordered Department of Safety troopers to inspect all commercial trucks for migrants and illegal drugs at all four international bridges in response to the Biden administration’s plan to end Title 42.

The increased inspections caused lengthy waits and traffic jams at the border and ignited protests by Mexican truckers that shut down several commercial crossings in Texas and New Mexico. The shutdowns caused millions of dollars in commercial losses and drove up the cost of goods.

Growing Number of Cuban Migrants Trying to Enter US Via Mexico

In Chile, Mapuche brothers sentenced to life in prison after controversial trial 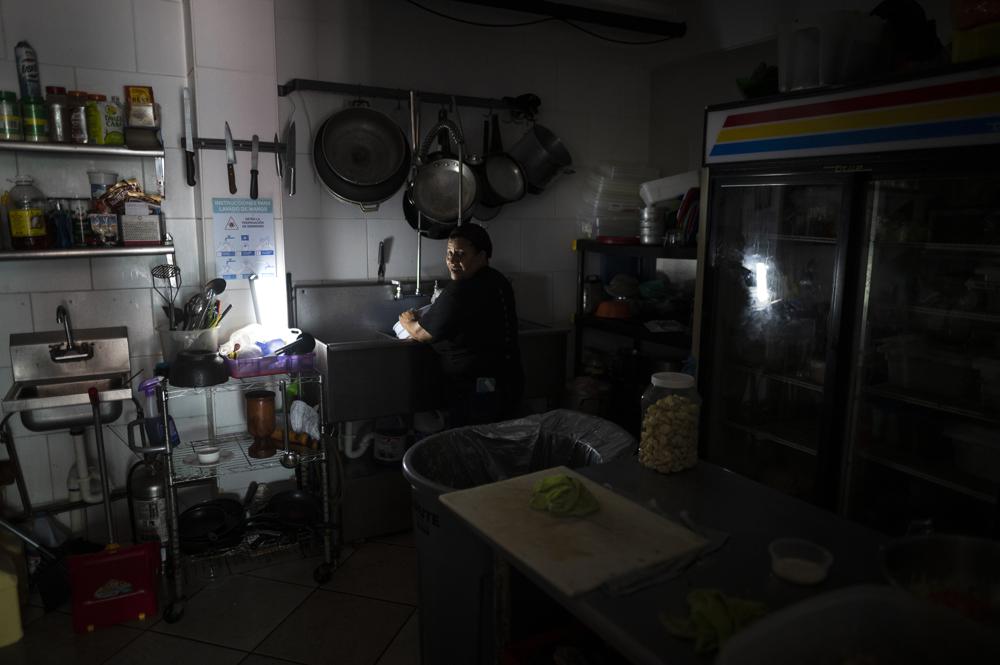