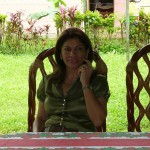 Chinchilla, a protege of current president Óscar Arias, ran on a platform promising to continue the Arias administration’s moderate free-market policies. The main opposition candidate, Ottón Solís of the Citizens Action Party, has conceded defeat. Solís had won 25 percent of the votes with most of the votes counted, according to The Associated Press.

“Today we are making history,” Chinchilla said of the election. “The Costa Rican people have given me their confidence and I will not betray it.”