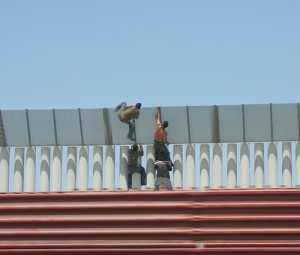 Top Story — A report issued by the Department of Homeland Security (DHS) Wednesday said that the number of undocumented immigrants in the United States in 2009 decreased by 800,000 from 2008.

In January of 2008, there were 11.6 million undocumented immigrants in the United States, while a year later there was 10.8 million, according to the DHS.

The recession may have played a role in this decline, as employment opportunities for immigrants became scarcer. A study published by the Inter-American Dialogue last August said that migrants have “suffered disproportionately compared to other groups across several economic indicators,” including above-average unemployment levels.

Analysts still lack the hard evidence necessary to attribute the decline in unlawful immigration, however. A study by the Pew Hispanic Center from June of last year found “no support” for the hypothesis that the current recession had prompted a significant increase in the number of Mexican-born U.S. residents choosing to return home. (The Pew study did not distinguish between documented and undocumented immigrants.)

California led the nation as the state with the most undocumented immigrants, followed by Texas, Florida, New York and Illinois.

Follow this link to view the complete DHS report.