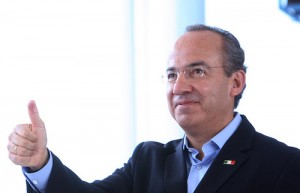 Top Story — Latin American and Caribbean leaders met Monday in Mexico for the Rio Group summit, where they proposed to create a group that could serve as an alternative to the Organization of American States (OAS).

“It’s time for Latin Americans and Caribbeans to unite,” said Mexican President Felipe Calderón at the meeting on Monday, according to the Los Angeles Times.

The nascent organization still has bureaucratic hurdles to jump. It has yet to receive a name and will not be established until 2011, according to reports from The Associated Press and Mercosur Press.

A hemispheric multilateral organization that excludes the U.S. and Canada would act as a balance to the OAS, where the U.S. plays a dominant role, advocates argue. Ex-President of Chile Michelle Bachelet supported the organization’s creation, but said that it should not aim to supplant the OAS.

The Rio group, whose meetings are not public, also discussed Argentina’s dispute with Britain over the Falkland Islands and promised $25 million in additional aid to Haiti. Haitian President René Préval attended the meeting and thanked the international community for its support.

Honduran President Porfirio Lobos was not invited to attend the conference. His administration is not recognized by the OAS.

The Rio Group is a multilateral organization of Latin American and Caribbean states that began in 1986 and meets annually.