Brazil, Turkey and Iran May Have Reached Agreement on Nuclear Program 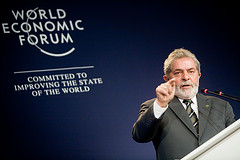 Top Story — Turkish Minister of Foreign Relations Ahmet Davutoglu said on Sunday that Turkey, Brazil and Iran had reached an agreement regarding a nuclear fuel swap between Iran and the West. The details of the agreement were not made public at the time of writing.

Lula said on Friday he was “99 percent” sure he could hammer out a deal with Iranian President Mahmoud Ahmadinejad this weekend.

Brazil has become a central player in the international conflict between Iran and a group of countries led by the United States that is pushing for the U.N. Security Council to hit Iran with sanctions for alleged violations of nuclear nonproliferation agreements.

Though the U.S. and Brazil have improved bilateral relations recently, signing a military cooperation agreement in in March, U.S. officials have viewed Brazil’s opposition to sanctions against Iran wearily.

“We will not get any serious response out of the Iranians until after the Security Council acts,” U.S. Secretary of State Hillary Clinton said on Friday.