Helicopters during a humanitarian mission in Colombia. Photo by Globovisión. 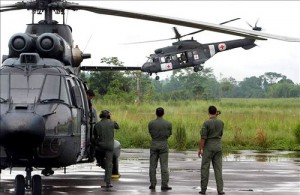 Helicopters during a humanitarian mission in Colombia. Photo by Globovisión.

Top Story — Colombia’s Supreme Court on Wednesday refused to admit as evidence files taken from a FARC guerrilla commander’s computer in a 2008 raid — a move that could potentially undermine prosecutors in up to 15 cases against politicians accused of collaborating with the FARC.

The ruling applies only to the case of William Borja, a former congressman for the Polo Democrático party.

The files taken from the computer of a FARC Commander known by his alias as Raúl Reyes have generated controversy since the Colombian military first obtained them during the operation that killed Reyes in neighboring Ecuador in 2008. Some view the FARC files as a smoking gun implicating a host of politicians including Venezuelan President Hugo Chávez and Ecuadoran President Rafael Correa, while others dispute the files’ authenticity.

The Court’s ruling does not challenge the documents’ validity, but said they were not admissible. The military seized the computers illegally because Colombia’s international agreements specify that Ecuadoran police agents should have handled evidence to be presented in Colombia, the Court said. The Correa administration did not approve the 2008 raid in Ecuadoran territory.

The Court also said the files could not be admitted because the documents in question were emails, but they were saved as text files and there was no evidence that the communications were ever sent or received.

Though the Supreme Court President Camilo Humberto Tarquino said the decision did not have implications for “current or future investigations,” ex-Senator Piedad Córdoba, also of the Polo Democrático, said she would appeal the decision that cost her seat in Congress based on the Borja ruling. Córdoba lost her seat in 2010 over allegations of collaborating with the FARC based on seized files. She is prohibited from holding political office for 18 years.

Prosecutor Hermes Ardila said the decision means cases based on the files “are almost collapsing because if we only have as evidence the information found in the computers, with the court’s decision, this evidence is no longer valid.” Prosecutors will now review the 15 pending cases to see which ones have sufficient evidence to move forward.

The controversy surrounding the FARC files returned in recent days, after London-based think tank International Institute for Strategic Studies published a book-length study based on the seized documents. Following the publication of the book, the Ecuadoran attorney general’s office said it would investigate President Rafael Correa over allegations that the FARC contributed $400,00 to his 2006 presidential campaign.

Venezuela averted a military coup ahead of May’s presidential elections