A document produced by Colombia's Department of Administrative Security discussing a plan to disinform the public. 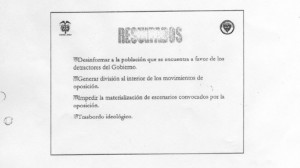 A document produced by Colombia's Department of Administrative Security discussing a plan to disinform the public.

On Nov. 17, 2004, Colombian journalist Claudia Julieta Duque received a phone call. Speaking with a calm voice, a man threatened to kill and rape Duque’s 10-year-old daughter. “Your daughter is going to suffer. We’re going to burn her alive. We’re going to scatter her fingers around the house,” the caller said. “We tried to tell you in every way we could. Now not even armored cars or lousy police reports will help you. We have no choice but to go after what you most love.” The call lasted less than a minute.

It was the first of countless threats that Duque has received in connection with her research of the 1999 assassination of journalist and comedian Jaime Garzón. Researching under the auspices of the José Alvear Restrepo Lawyers’ Collective, Duque concluded that Colombia’s intelligence service, the Department of Administrative Security (DAS, in Spanish), had interfered with the investigation into Garzón’s murder.

Five years after the call, Duque found out who was responsible for it. When reviewing folders of documents seized from the DAS by the Prosecutor General’s Office, Duque came upon a manual written on DAS stationary outlining how to make a threatening phone call to her.

“Don’t stutter, nor allow the conversation to proceed for longer than 49 seconds,” the manual said. It recommended taking special precautions, since the DAS knew that Duque had caller ID and recorded her conversations. “Call preferably from an ETB payphone using a card, in case she immediately returns the call.”

The revelation that the DAS had terrorized a journalist was just one of a slew of criminal acts committed by the agency that have been uncovered in the last five years. A former DAS director awaits trial for providing intelligence to paramilitaries, the agency has illegally wiretapped and surveilled government critics and in April, documents surfaced indicating that the DAS coordinated “political warfare” against government critics, by disseminating false rumors accusing them of connections with leftist guerrillas. It is not yet clear who ordered these illegal tactics. But as the evidence continues to mount against Colombia’s disgraced intelligence agency, the scandal inches ever closer toward President Álvaro Uribe.

The Department of Administrative Security has an unusual history. It was formed in 1960, when it took over the functions of the Colombian Intelligence Service (CIS). In a country known for its history of democratic elections and independent government institutions, the CIS had been created in 1953, during the nation’s only 20th-century dictatorship. Reflecting that brief period of concentration of power in the executive, the DAS remains a subdivision of the presidency of Colombia, rather than the Ministry of Justice or Defense. The agency gathers domestic and international intelligence, handles immigration issues and works with foreign policing institutions, such as Interpol and the U.S. Drug Enforcement Agency. When travelers arrive in Colombia from abroad, the DAS stamps their passports.

In 2005, it became clear that the DAS was stepping outside the bounds of its mission statement. The agency’s director, Jorge Noguera, was forced from office amid accusations that he had provided intelligence to right-wing paramilitaries and participated in the creation of hit lists of leftists, many of whom were later killed or threatened. He is now in prison facing charges that include aggravated homicide.

Noguera’s second-in-command at the DAS, José Miguel Narváez, also faces accusations of links to paramilitaries. In 2008, demobilized paramilitary Jorge Iván Laverde accused Narváez of ordering the assassination of Jaime Garzón—the journalist whose death Duque was researching—but he has not yet been charged with the crime. Laverde also said that Narváez frequented paramilitary camps to give a class called “Why it is legal to kill communists.”

The controversy died down until February 2009, when the Colombian magazine Semana revealed that the DAS was wiretapping phones without authorization and illegally surveilling journalists, human rights workers, politicians, and Supreme Court justices—nearly all of them opponents of President Uribe. “Any person or entity that represents an eventual threat to the government should be monitored by the DAS,” one of the agency’s functionaries told Semana. “And within that scheme of ideas, for more than a year some activities of the (Supreme) Court and some of its members began to be considered legitimate ‘targets.’”

The discovery of the DAS’ illegal surveillance revealed the precarious state of freedom of the press in Colombia. The confluence of a decades-long leftist insurgence, the rise of right-wing paramilitaries, and the added complication of drug traffickers had already given Colombia a reputation as the most dangerous country in the hemisphere for journalists (a distinction recently ceded to Mexico). Now, it’s becoming clear, journalists can count the government itself among the many dangers they face.

Carlos Lauria, Americas director at the Committee to Protect Journalists (CPJ), says the DAS’ illegal spying is “one of the main problems facing Colombian journalism.” According to the CPJ, at least 73 journalists have been killed in Colombia since 1992. Though murders of journalists have decreased in recent years, “that doesn’t mean that freedom of the press has improved significantly,” according to Lauria. “There’s a lot of self-censorship. There are threats.”

A short, light-skinned man with glasses who wears his closely cropped, grey hair parted to the side, Colombia’s President Álavro Uribe Vélez looks like a mild-mannered bureaucrat. He doesn’t act like one. He gives his speeches with a theatrical trill. He once famously shouted at a government underling accused of corruption, “If I see you, I’m going to punch you in the face, faggot!” in a taped phone call that was dissiminated by the local press.

Uribe rose to popularity in 2000, promising to attack the Revolutionary Armed Forces of Colombia (FARC, in Spanish), the continent’s last major guerrilla army, more aggressively. He has succeeded.

The Colombian military killed the FARC’s second-in-command, known by his nom de guerre as Raúl Reyes, in an airstrike along the Ecuadorian border in March 2008. The FARC were further debilitated two months later when their leader and founding member, known as Manuel Marulanda, died of a heart attack. An increased military presence, financed largely by more than $6 billion in U.S. aid through a program called Plan Colombia, has made Colombia’s cities and major highways more secure.

Had any such systematic spying on every branch of government, journalists, courts, prosecutors, opposition leaders, human rights organizations, etc., including the facilitation of disinformation and even assassination campaigns, been alleged against the Venezuelan government, it would be on the front pages and leading the op-ed pages of every single American daily.

But since it’s the close ‘ally’ of the conservative Uribe government of Colombia, this systematic abuse of power (with the nonsensical presumption of Uribe’s clean hands via Reaganite ‘plausible deniability’) gets downplayed and every time Hugo Chavez looks at somebody or says something else pompous and ridiculous, it’s major news.

[…] Morris, a journalist whose investigative reporting on the connections between paramilitary violence and poli… in war-torn Colombia has earned him and his family repeated death threats, was denied a visa this […]

[…] the Uribe administration fared poorly in the realm of human rights. Colombia’s intelligence service, known as the DAS, has spied on and, in some cases, threatened opposition politicians, journalists […]

[…] to know how ugly it got?  Here’s an article about a victim of the DAS death threats and intimidation from the Latin America News […]

[…] will come speak about what “freedom” of the press looks like in Colombia.  As the Latin America News Dispatch reports, “Hollman Morris is intimately familiar with Uribe’s low tolerance for […]

[…] well-known Colombian journalist will come speak about repression of the press in Colombia.  As the Latin America News Dispatch reports, “Hollman Morris is intimately familiar with Uribe’s low tolerance for […]

[…] Ex-President of Colombia Álvaro Uribe’s then-Chief of Staff Bernardo Moreno was sent to jail on Saturday for alleged involvement in the DAS scandal. […]

[…] Colombia’s DAS was disgraced two years ago, after it was revealed that the agency had spied on the Supreme Court, opposition politicians, human rights groups and journalists. The new documents indicate that the illegal spying was even more widespread than previously suspected. […]

[…] Read more from the Associated Press and learn about the DAS’ background in this piece from the Latin America News Dispatch. […]