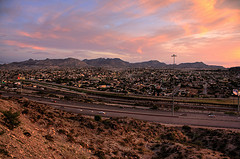 The border between the U.S. and Mexico along the cities of El Paso and Ciudad Juarez.

Top Story — Mexico experienced another wave of violence over the weekend that began with the first reported car bomb attack related to the country’s ongoing drug war on Thursday, and ended with the death of 17 people after gunmen shot up a party early Sunday.

A car bomb exploded late Thursday night in the troubled border city of Ciudad Juarez, killing two police officers and two medics, as well as injuring 16 other people. The bomb is believed to have been set off by a mobile phone.

The perpetrators allegedly lured authorities to the scene by calling for emergency crews.

Local authorities said that the car bomb was a retaliation against the police for the arrest of Jesús Acosta Guerrero, a leader in the La Línea drug gang. La Línea is allegedly part of the Juarez drug cartel.

“This is an extreme situation. I think this will change people’s fears to the worst. …This is something we thought just happened in societies like Iran or Iraq,” said Jessica Peña, a sociology professor at the Autonomous University of Ciudad Juarez, according to the Christian Science Monitor.

On early Sunday morning, gunmen opened fire on a party in the northern Mexican city of Torreón, where they killed 17 people and left another 18 people wounded.

Many off those killed in the shooting were young and five were women, but local authorities have yet to determine the identities and ages of all those killed.

The Mexican government said that the shooting appeared to be the work of drug cartels operating in the area, but had not determined the possible motive for the killings as of late Sunday.

Across northern Mexico there has been an increase in mass shootings, especially at parties and in bars. Many have blamed the violence on warring drug cartels and the clampdown on drug trafficking by the government of Mexican President Felipe Calderón.