Paraguay, This Week in Latin America 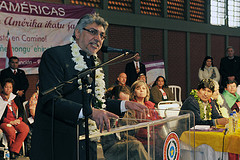 Top Story — Fernando Lugo is feeling optimistic that he can serve his full term as president of Paraguay, after finishing his first session of treatment for cancer.

Lugo said that his illness was both “controllable and reversable” at a speech on Saturday. He gave the speech upon his return from São Paulo in neighboring Brazil, where he began chemotherapy last week.

Neither the illness nor its treatment will “impede the progress of the government’s agenda,” Lugo added.

Lugo was recently diagnosed with non-Hodgkin’s lymphoma and will undergo five more chemotherapy sessions, according to The Associated Press. The AP reported last week that Harvard University researchers believe his cancer is of low malignancy.

Lugo also addressed the Fourth Americas Social Forum on Saturday, where he said that Paraguay would continue to seek justice for the coup in Honduras that ousted the elected government of Manuel Zelaya last year.

“The coup in Honduras taught us that our processes are never sufficiently consolidated,” Lugo said, referring to the trend of democratization in Latin America. “That’s why we must remain alert. The enemies of democracy and change will keep posing threats to the happiness of our people,” he added.

On Sunday, Lugo met with the presidents of Bolivia and Uruguay to discuss energy integration. At the meeting, Uruguayan President José Mujica expressed an interest in establishing a deep-water port for landlocked Paraguay, according to Uruguayan daily El País.

The meeting marked the revamping of the long ignored “Urupabol,” a coalition between the three countries originally established in the 1960s.

Spanish speakers can view the speech Lugo gave upon arriving in Asunción after his first chemotherapy treatment in the video below.