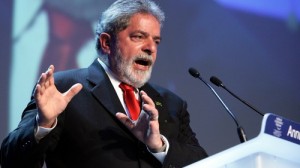 Luiz Inácio “Lula” da Silva took office on Jan. 1, 2003, having won 46.4 percent of the popular vote — twice as many as the second-place candidate, José Serra, of the conservative Brazilian Social Democracy Party (PSDB).

“I, who so many times was accused of not having a university diploma, won my first diploma as President of the Republic of Brazil,” said the teary-eyed founder and historic leader of the Workers Party (PT).

But Lula was not satisfied with those 39 million votes — as he upped the ante when reelected in Oct. 2006, this time taking 46 million (equal to 48.6 percent of the votes cast).

Lula can no longer repeat the feat — the Brazilian constitution prohibits a third, consecutive term. However, other figures indicate that he’s still the big winner in the upcoming elections: 79 percent of Brazilians consider his administration excellent or good, according to research by the Brazilian pollster Datafolha, published in August 2010.

His approval rating is so high, it’s spilling over to his chosen successor for the Oct. 3 elections. Dilma Rousseff, who served as Lula’s cabinet chief, was chosen to represent the continuation of the model that, until now, has yielded postitive results.  Despite not having a strong presence among the voters, Rousseff has managed to amass 51 percent of intended votes, according to a recent poll by Datafolha. She leads her main rival — again, José Serra — by 24 points.

So what is it about Lula that gave him a level popularity so few leaders manage to attain?

Lula is of the people

Brazilian society identifies with the president, according to William Gonçalves, a professor at the State University of Rio de Janeiro.

“Lula is a man of the people. He understands their necessities and speaks like them,” Gonçalves said. “The president made mistakes, whether they were factual or because of his lack of traditional education, the cultivated, upper-middle class would criticize him. But those objections didn’t hurt Lula’s image in the minds of people in general.”

It was not just his simple and direct style that earned him popular admiration, but also his social programs designed to bridge the gap between the weathy and the poor. One of the best known of these programs is Bolsa Família, which he implemented shortly after taking office and which, according to government figures, reaches 12 million homes.

The program gives poor families a monthly subsidy of between 22 and 200 reais per child (approximately U.S.$12 to $117).

Thanks to this and other measures, 30 million people entered the ranks of the middle cass and 19 million people managed to make it out of extreme poverty during Lula’s eight years in office, according to a study conducted by the Center of Social Policy at the Getulio Vargas Foundation (CPS-FGV) and published by the Argentine daily Clarín.

What’s more, there was a noticeable impact on wealth distribution: 40 percent of the poorest Brazilians increased their wealth 3.15 percent, while the richest 10 percent saw their wealth increase at a more modest 1.09 percent, according to the CPS-FGV.

But not everyone agrees with this vision.

Daniel Rittner, a journalist with Valor Económico, said that, notwithstanding a clear reduction in poverty, “the advances in education have been too slow and it’s creating the risk of a generation of state-dependent individuals.”

Rittner added that Lula’s success was not his alone; he inherited a positive situation from his predecessor. “Lula left all his radicalism in the past. He knew how to control the most extreme sectors of the PT and he opted to continue the path toward stability that had its beginning in the two administrations of Fernando Henrique Cardoso (1995-2002).”

Brazil and the world after Lula

Beyond Lula’s accomplishments at home, many are speculating what the future of foreign relations will be for one of the world’s emerging nations. There’s not much to worry about, according to specialists, given that Lula’s model will surely continue under the management of Rousseff, who most observors now expect to win in the election’s first round.

“There won’t be changes in foreign policy. The political line will be the same,” said Gonçalves.

Mónica Hirst, professor of international relations at Torcuato Di Tella University in Argentina, agreed with Gonçalves, adding that “Brazil’s integration with Mercosur (South American trading bloc) and the rest of the world will continue to deepen.”

For his part, Rittner partially agreed and said that “Rousseff should give contiuity to a policy of rapproachment with Brazil’s Mercosur neighbors and relative tolerance to the Argentine government’s protectionist commercial measures.”

But when it came to Brazil’s world presence, Rittner asked “to what degree does Brazil’s projection in recent years have to do only with its growth and to what degree with Lula’s personal marketing? Rousseff doesn’t have the charisma or the life story that Lula does. Without him, we’ll see more clearly what Brazil’s new international, geopolitical role truly is.”

When the polls close in Brazil , the preference of the country’s more than 130 million voters will be known. Currently polls indicate that Rousseff will take an absolute majority, obviating the need for a second-round vote on Oct. 31.

What remains to be seen is what Lula’s future will be. While there are several rumours floating around, all agree that Lula won’t be satisfied being an ex-president with a low profile. Now the big question is if, at 67 years old, Lula plans to run again 2014.

In a recent interview with channel TV Record in São Paulo, the president left the door open: “My answer is no, I tell you with my heart,” Lula said. “But in politics, you can never say no.”

Hugo Passarello Luna is the founder and director www.argentinaelections.com, where this article originally appeared in Spanish.

[…] vote took place as Brazil is enjoying strong economic growth and a reduction in the size of its notorious wealth gap, which has fed the popularity President Lula da Silva the […]

I am so happy to see that you were wrong in your projections. I would loove to see Seera win in the runoff but we probably won’t be so lucky. Believe me, Lula is not as popular as he has manipulated the Brazilian people to believe. And where do you think all this money is coming from for the Bolsa Famíliar, not to mention Dilma’s makeover!!!, and various other bolsas?? The middle class of course. Lula should have invested this money in improving health and education. Based on the philosophy of Aid Organizations, nothing should be given for free!! The objective of these organizations is to use their funds to teach people to look after themselves and not just throw money at them. The trend now in Brazil is for people to apply for the so called “Bolsa Esmola” and go into early retirement. After all why should they work when the government (i.e. us the taxpayer) is prepared to support them.
Another great incentive by the Lula government is the “bolsa” for prisoners – yes for prisoners!! Did you know that the government passed a law stating that each person in prison is to receive R$760,00 per month for each of their children!!! So not only is Lula encouraging people to procreate, he is asking them to become crinimals in order to get rich at the cost of the taxpayer!!! Just goes to show that crime does pay and woe to those who are honest!!! God bless Brazil

[…] election results were unsurprising. The handpicked successor and former chief of staff for current President Luiz Inácio “Lula” da Silva had garnered the majority of votes in the first-round election on Oct. 3 and has enjoyed a […]