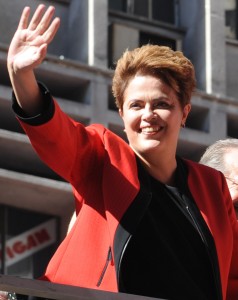 The election results were unsurprising. The handpicked successor and former chief of staff for current President Luiz Inácio “Lula” da Silva had garnered the majority of votes in the first-round election on Oct. 3 and has enjoyed a comfortable lead over Serra in polls taken since.

And though Rousseff viewed her electoral triumph as a new stage of democracy, analysts tend to view it as a vote for a continuation of the policies of President da Silva, who has was first elected in 2002 and has served two terms as president. Da Silva is credited with bringing 20 million people out of poverty, according to Reuters, while simultaneously presiding over healthy economic growth.

“My mission is to eradicate poverty,” Rousseff said after the Supreme Electoral Tribunal declared her the winner of the election, CNN reports.

Rousseff also highlighted the significance of her election as step forward for women in what is often regarded as a sexist society, saying “I hope the fathers and mothers of little girls will look at them and say, yes women can,” she said.

Indeed, one of the hallmarks of da Silva’s presidency has been his ability to balance the interests of his leftwing constituency and more conservative business interests.

Da Silva’s election in 2002 brought with it financial panic. In contrast, Brazil’s stock market, bonds and currency posted gains in the lead up to Rousseff’s election Sunday, according to Reuters.

Portuguese speakers can see brief clips of Rousseff speaking to reporters on Sunday from this newscast by Folha do Sul.

OAS Demands Nicaragua To Release All Political Prisoners By June 18