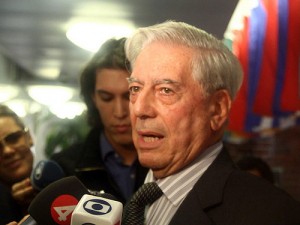 Peruvian Nobel Laureate Mario Vargas Llosa, a political conservative famous for his criticism of Latin America’s far left, discarded the possibility of voting for rightwing candidate Keiko Fujimori in Peru’s runoff presidential election, saying that supporting her would amount to justifying the dictatorial government of her father Alberto.

“I don’t have any doubt that electing Keiko Fujimori as president would be the worst mistake that Peruvians could make,” Vargas Llosa wrote in a widely circulated opinion piece Sunday. “It would amount to legitimating the worst dictatorship we’ve suffered during our history as a republic.”

Alberto Fujimori remains a controversial figure in Peru. Running as a political outsider and polling in the single digits, he came from behind to defeat Vargas Llosa in the 1990 presidential election.

In 1992, with the support of the Peruvian military, Fujimori dissolved Congress and the courts, and concentrated power in the executive. Fujimori justified his illegal seizure of power by arguing he needed exceptional authority to combat a leftwing insurgency led by the Shining Path.

Fujimori won reelection in 1995 with an overwhelming majority, resulting largely from his wins against the rebels and his success controlling hyperinflation. But he fled to Japan in 2000, after a bribery scandal involving his former intelligence chief Vladimiro Montesinos disgraced him.

Fujimori is currently in a Peruvian jail, serving a 25-year sentence after being convicted of ordering death squads to kill 25 people during his presidency. Many suspect that his daughter plans to pardon him if elected, though she says she will not.

The first major poll since the first-round election on April 10 favors Ollanta Humala with 42 percent of the vote, versus 36 percent for Keiko Fujimori. Some 22 percent of those surveyed by Iposos Apoyo said they either did not know who they would vote for or that they would spoil their ballot.

[…] Vargas Llosa has chosen to publicly support Humala, saying that electing Keiko “would amount to legitimating the worst dictatorship […]