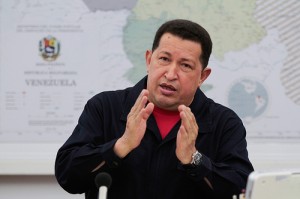 Top Story — Throughout Latin America the response to the death of Osama bin Laden was met mostly with moderation and congratulatory remarks toward the United States.

However, Venezuela’s Vice-President Elías Jaua had some harsh words about the celebrations, which occurred in Washington, New York and other cities across the United States after the announcement of bin Laden’s death.

Jaua said he was speaking from a “human point of view,” and criticized the reactions in the United States to the killing.

“It surprises me to no end how natural crime and murder has become, how it is celebrated,” Jaua said, on Venezuelan state television. “At least before, imperialist governments were more subtle. Now the death of anyone, based on what they are accused of, but not only those working outside of the law like bin Laden, but also presidents, the families of presidents, are openly celebrated by the leaders of the nations that bomb them.”

Earlier on Sunday, Venezuelan President Hugo Chávez continued his criticism of U.S. and North Atlantic Treaty Organization (NATO) airstrikes on Libya. However, since the announcement of bin Laden’s death the Venezuelan leader has been quiet about the news.

Mexico’s Secretariat of Foreign Relations issued a statement calling bin Laden’s death “an event of great importance in the efforts to free the world from the scourge of terrorism.”

Further reading: farewell Geranimo | beyondbrics | News and views on emerging markets from the Financial Times – FT.com says:
May 4, 2011 at 4:30 am

The death of Osama Bin Laden by the US terrorists is nothing more than the murder of a pickpocket by a robber for the reason of pickpocketing. We know the history of American imperialism. We know the war waged by America in the Carribean area or Vietnam or Korea or Congo and so many others simply the people or the administration did not move to their will. We have seen the droping of bombs and food packets together. What does that mean? President Hugo Chavez is right to refer George W Bush as the devil. More than him I would like to call him a monster. Even in calculation of deaths Bush or Obama or any president of US has killed more people in the time of their presidency than Osama Bin Laden in his entire life. We haven’t forgotton the American support for the dictators like Batista, Suharto, Mubuto Sese Seko, even Benito Mussolini and Adolf Hitler were supported by US imperialistic government. It is the same US government to kill millions of Japanese in Hirosima and Nagasaki using the bombs it oppeses for the manufacture by other nations. If US sees human rights than thousands of people are thrown from Bhutan towards Nepal by the aid of its puppet India,why doesn’t US speak against this rather talks about Tibetan refugees. Why? Because Tibetans are more profitable to the in fragmenting China like it had done to USSR. Uncle Ho was an overdue answer to Martin Luther king or MK Gandhi but his name is not uttered anywhere by the US why? Because he opposed the Americans in Vietnam. Though Laden is dead he is my HERO not because he was a muslim exremist but because he was a true man to wage war against American HEGEMONY. Long live Osama Bin Laden. US hagemony goes down to hell.