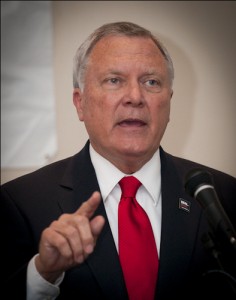 A heated debate over the U.S. immigration system has erupted in Florida and Georgia this week as both states are on the verge of implementing Arizona-style bills designed to curb illegal immigration.

Georgia HB 87, approved by the state legislature last month and likely to be signed by Georgia Governor Nathan Deal this week, would require law enforcement officials to investigate the immigration status of those they stop whom they suspect are in the country illegally, and would punish businesses and individuals who transport or harbor undocumented workers.

“Illegal immigration costs Georgia taxpayers hundreds of millions, if not billions of dollars, each year at the city, county and state levels,” said Brian Robinson, Deal’s spokesman. “Georgia will treat everyone in our state with respect, and we want to encourage immigrants who settle in Georgia to go through the proper legal channels. Frankly, Georgia is leading the way by requiring that employers follow existing federal law. Look for other states — who face the same challenges and costs — to follow Georgia’s lead.”

Florida SB 2040, which like the Georgia bill is written in the spirit of Arizona’s controversial SB 1070, would additionally call on Florida employers to run the names of prospective employees through a database known as e-Verify to determine their work status. The Florida bill was scheduled for a vote in the state senate on Monday, but was pushed back to Tuesday for further debate.

Most of the provisions of Arizona’s immigration law, which was scheduled to take effect on July 29, 2010, were blocked by the 9th U.S. Circuit Court of Appeals last month, which said the federal government has sole authority to enforce immigration.

On Tuesday, the American Civil Liberties Union and National Immigration Law Center sued the state of Utah in federal court for passing a bill similar to Arizona’s SB 1040 in March, saying the bill invites racial profiling and interferes with federal law. The Atlanta-based Human Rights Network, whose founders include the ACLU, Amnesty International U.S.A. and the NAACP Legal Defense and Education Fund, has meanwhile vowed to relocate a biannual human rights conference to another state if Georgia’s HB 87 is approved.

“America is not a ‘show me your papers’ country. No one should be subject to investigation, detention and arrest without any suspicion of criminal activity,” said Cecillia Wang, managing attorney with the ACLU Immigrants’ Rights Project.

In both Florida and Georgia, opposition to the bills has been formidable and comes from a variety of sectors – not only immigrants’ rights groups and civil liberties organizations have protested, but also law enforcement, agroindustrialists, and business leaders wary of provisions that would stipulate who they can and can’t hire.

President Obama met Tuesday afternoon with the Congressional Hispanic Caucus, reviving a vow he made early in his presidency to reform the nation’s immigration system. It was his third meeting in three weeks on the issue.

From ‘Just a Mom’ to Immigration Activist: Salvadoran TPS Holder Fights to Keep Her Family Together

so what this is doing is mixing government powers. only the federal government has such control over immigration status and besides that you are making racial profiling legal leaving the legal immigrants that are descendents from illegals to be discrimated against simply because “we” look illegal. what has the united states come to? i’m ashamed of how we are somewhat going back to the days of where you were judged by the color of your skin.