The Madres de la Plaza de Mayo, who have been marching since 1977 to find Argentina's disappeared. Photo by Ariel Monno. 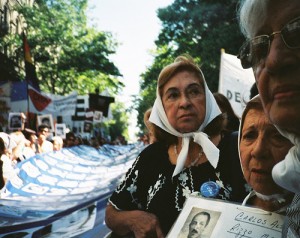 The Madres de la Plaza de Mayo, who have been marching since 1977 to find Argentina's disappeared. Photo by Ariel Monno.

Three former pilots for the Argentine Coast Guard were brought before Federal Judge Sergio Torres on Tuesday to face charges for their involvement in death flights that killed hundreds of political prisoners during Argentina’s 1976-1983 military dictatorship.

Enrique José De Saint Georges, Mario Daniel Arru and Alejandro Domingo D’Agostino are accused of flying the military planes from which political dissidents and social activists were thrown alive into the sea, including a flight that carried two French nuns and the founder of the Madres de la Plaza de Mayo to their deaths in December 1977. The men are suspected of participating in 20 such flights. Until they were suspended last month, both Saint Georges and Arru worked as pilots for Aerolíneas Argentinas.

Torres also ordered the detention of former Navy official Ricardo Rubén Ormello and lawyer Gonzalo Dalmacio Torres de Toloza for their connections to the death flights and to the clandestine detention center at the Navy Mechanics School in Buenos Aires (ESMA), a notorious torture site where thousands of political opponents of the military regime were disappeared.

The three pilots were ordered detained in April by judge Eduardo Taiano, who said the men flew a Skyvan plane out of Jorge Newberry Airport on December 14, 1977 after picking up a dozen political prisoners from ESMA for “transfer”, the military’s euphemism for execution. The plane returned to Buenos Aires three hours and ten minutes later.

On December 20, 1977, bodies washed up on the beaches of Buenos Aires province and were buried in unmarked graves by the authorities in the town of General Lavalle without further investigation. It wasn’t until 2005 that the Argentine Forensic Anthropology Team discovered and identified the remains of those killed.

Azucena Villaflor, a founding member of the Madres de la Plaza de Mayo, María Ponce de Bianco, Esther Ballestrina de Careaga, Angela Aguad and Sister Léonie Duquet were all discovered in the mass grave in General Lavalle.  Sister Alice Domon was never found. The women, who had published the names of disappeared Argentines in the newspaper, were among twelve people captured between December 8 and 10, 1977, when Navy officer Alfredo Astiz infiltrated the group at the Church of Santa Cruz after the women took him under their wing, unaware of his true identity. The women were detained and tortured at ESMA before they were killed.

Astiz, 59, may face a life sentence for the murders and was tried in absentia by the French government for the deaths of Duquet and Domon. The nuns were last seen in a staged photograph taken at ESMA on December 14, 1977, posing in front of a flag for the Montoneros, a leftist guerrilla group.

According to the judicial unit coordinating human rights investigations on behalf of the Argentine Attorney General, 2758 death flights occurred in Argentina between 1976 and 1978. Human rights groups say that some 30,000 people were disappeared during the country’s dictatorship.

On April 30, the Madres de la Plaza de Mayo commemorated the 34th anniversary of the rights group’s first march in front of the Casa Rosada in Buenos Aires in 1977, where Villaflor’s remains are now buried.

[…] In 2002, a declassified State Department cable from the U.S. Embassy in Buenos Aires showed that the U.S. knew since 1978 that the bodies of a kidnapped French nun and members of the Madres de la Plaza de Mayo had been recovered on a beach in Buenos Aires province. Last week, five men believed to be responsible for the deaths were arrested in Argentina. […]