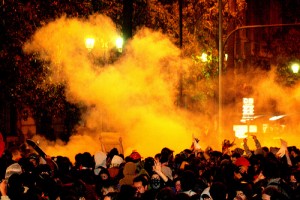 Chile’s Interior Minister announced Wednesday that the country’s police forces will be temporarily prohibited from using tear gas against protesters after a study by the University of Chile showed that CS gas, also known as chlorobenzylidene malonontrite, may cause miscarriages and harm young children.

“There’s a probability that the chemical substances in tear gas can affect reproductive function, damage the fetus in the last trimester of pregnancy and children in the first years of life,” said Andrei Tchernitchin, a toxicology expert at the Faculty of Medicine at the University of Chile.

Last week, tear gas bombs and water cannons were used against 30,000 protesters demonstrating against the recently-approved hydroelectric project HidroAysén, to be constructed on the Baker and Pascua rivers in Patagonia. The project, which would build five new power stations and and a 1,180 mile transmission line, would flood nearly 6,000 hectares (14,800 acres) of land. The protests are expected to continue and intensify in time for the Chilean President Sebastian Piñera’s annual address, traditionally held on the 21st of May.

Although the use of tear gas is suspended for now, the Chilean government hasn’t ruled out its future use. “As the protection of our compatriots is the principal objective of our government, it seems reasonable to suspend the use of tear gas until new medical reports dispel any doubts about the appropriateness of employing these gases to confront situations of public disorder and vandalism,” said Chilean Interior Minister Rodrigo Hinzpeter.

Deputy Guillermo Teillier, president of Chile’s Communist Party (PCC, in Spanish), said he hoped the government’s decision would be lasting and that “they won’t go do studies and later say that [tear gas] does not compromise health and they’ll keep applying it in the same way the do now.”

Tear gas was first used by Chile’s police forces during the 1973-1990 dictatorship under Augusto Pinochet.

Chilean Government Resumes Use of Tear Gas As HidroAysén Protests Continue | Latin America News Dispatch says:
May 25, 2011 at 7:32 am

[…] Carabineros resumed the use of  tear gas on Friday, a mere three days after Chilean Interior Minister Rodrigo Hinzpeter had called for its temporary suspension, as massive demonstrations against the HidroAysén dam project in Chilean Patagonia […]