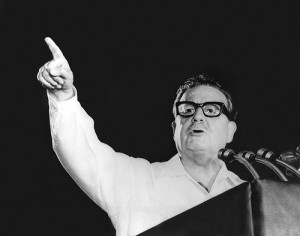 A Chilean forensic team exhumed the body of former Chilean president Salvador Allende on Monday, seeking to clarify the causes of Allende’s death on September 11, 1973. For decades, Chileans have debated whether the former president committed suicide in a last stand before his Popular Unity government was overthrown in a military coup, or whether he was murdered by members of the Chilean armed forces.

Allende, Chile’s first democratically-elected socialist president, died during the bombing of La Moneda palace, marking the beginning of the country’s 1973-1990 dictatorship under Augusto Pinochet. Thousands of Chileans were kidnapped, tortured, and disappeared during the country’s military regime, and many more were forced into exile.

According to autopsy reports following his death, Allende shot himself with an AK-47 that had been given to him by Fidel Castro.  Allende’s family has largely supported this account. However, a review of the original autopsy in 2008 by Chilean forensic expert Dr. Luis Ravanal said that Allende’s wounds did not support the conclusion that the president had killed himself, as evidence showed that he may have been killed with two different weapons.

Chilean judge Mario Carroza ordered Monday’s autopsy after an April report by Chile’s Legal Medical Service (SML) said there were discrepancies between the military-ordered autopsy report conducted after Allende’s body had been transferred to the Military Hospital and the police report conducted at the site of Allende’s death in the Salón Independencia of La Moneda. A new autopsy, conducted by a team of national and international forensic experts, should establish how many bullets killed the former president, and will help determine whether Allende’s wounds were self-inflicted or not.

“The people want to know. This is something the country needs,” said Carroza, the judge in charge of the investigation of Allende’s death.

Minister of the Interior Rodrigo Hinzpeter stated in April that the administration of Sebastián Piñera supports the exhumation of Allende. “This is a decision that has been adopted by the Judicial Power, is supported by the family of Ex-President Allende and that our government receives with positive enthusiasm because countries have to advance, leaving the smallest spaces possible for uncertainty about their history,” said Hinzpeter.

After his death, Allende was anonymously buried in Viña del Mar.  When Chile’s democratic institutions were re-established in 1990, Allende was finally given a state funeral and buried in a mausoleum in the General Cemetery in Santiago.

The Chilean government is currently investigating 726 cases of human rights violations that occurred during Chile’s military dictatorship, including Allende’s death.

A video of Allende’s exhumation can be viewed online.

[…] May 23, Allende’s body was exhumed by forensic experts to determine whether the former president had been murdered or if he took his own life during the […]