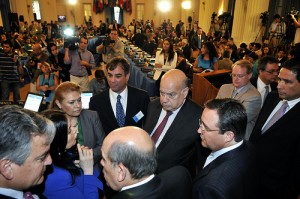 A special session of the OAS General Assembly voted to reinstate Honduras on Wednesday.

Top Story — The Organization of American States (OAS) readmitted Honduras to the regional bloc Wednesday, ending a two-year diplomatic hiatus that began with the June 2009 coup that ousted then-President Manuel Zelaya from power.

The group, which consists of the 34 independent states from the Western Hemisphere excluding Cuba, lifted the suspension after a 32-1 vote during a special meeting held at its headquarters in Washington D.C.

“This is an important milestone for Honduras, for this organization and for our hemisphere,” said Arturo Valenzuela, the U.S. Assistant Secretary of State for Western Hemisphere Affairs.

Honduras’ 2009 coup was triggered by Zelaya’s decision to hold a non-binding referendum asking people whether they supported holding a constituent assembly to rewrite the constitution, which many viewed as a plot to remove constitutionally mandated presidential term limits.

The coup leaders sent Zelaya to Costa Rica, but he tried numerous times to return. Two months later he managed to make it into Honduras and boarded himself in the Brazilian Embassy before agreeing to go into exile in the Dominican Republic in January 2010.

The coup was broadly condemned by the international community and the OAS quickly expelled Honduras with many member nations cutting off aid to the impoverished Central American country. The decision to readmit Honduras to the group was hotly debated even after the interim government held an election in 2009, bringing current President Porfirio Lobo into office.

It was not until presidents Juan Manuel Santos of Colombia and Venezuela’s Hugo Chávez brokered a deal to allow Zelaya to return from exile that the OAS moved to readmit Honduras.

Zelaya returned Saturday to Honduras from 16 months in exile after charges brought against him during the coup were dropped. Zelaya, who is still a popular figure in Honduras, plans to reenter the political arena.

Ecuador was the only country to vote against readmitting Honduras, saying it was not appropriate for Honduras to return due to the country’s poor human rights record and the fact that the coup plotters went unpunished.

“Ecuador considers that the conditions do not exist to fully restore Honduras to this organization,” said María Isabel Salvador, the country’s ambassador to The OAS. “Rule of law has not been completed. … Repressive impunity continues.”

Violence Against Women Is Widespread in El Salvador’s Gangs 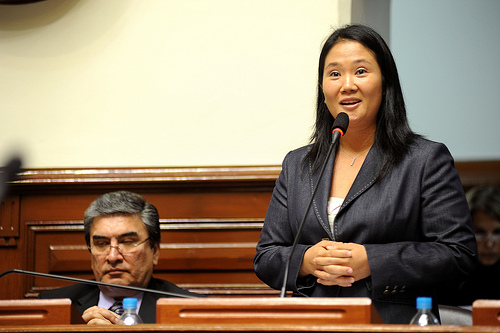 […] this month, the Organization of American States (OAS) voted to allow Honduras back into the regional group, ending a two-year diplomatic hiatus that began with the June 2009 […]

[…] this month, the Organization of American States (OAS) voted to allow Honduras back into the regional group, ending a two-year diplomatic hiatus that began with the June 2009 […]