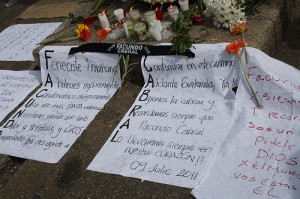 Two men have been detained in last weekend’s killing of famed Argentine folksinger Facundo Cabral in Guatemala, according to a Guatemalan investigator.

On Monday, Guatemalan President Álvaro Colom blamed organized crime for the killing of Cabral. While the Guatemalan president didn’t specify which organized crime group was involved, it is known that both Mexico’s Zetas and Sinaloa drug cartels operate in the country.

Earlier Tuesday, Cabral’s body was flown to his native Argentina on a Mexican Air Force jet. It is a fitting tribute, as the singer spent much of his life as refugee in Mexico during Argentina’s years under dictatorship.

Cabral’s remains were received on the tarmac in Buenos Aires by his family, diplomats from Guatemala and Mexico and Argentine foreign minister Hector Timerman. Along with his body, an official brought from the plane a guitar and a small bag that Cabral used during his almost constant touring schedule.

The singer’s coffin will be displayed for the public at the Ateneo, the Buenos Aires theater where he last performed in Argentina. Cabral’s body will later be cremated, according to his former manager Pablo Pérez Iglesias.

In 1996, Cabral was named a United Nations Messenger of Peace and he performed concerts in over 165 countries. He was 74 when he died.

[…] from all sectors of society gathered on the streets of Guatemala City to show their outrage at the murder of Argentine folksinger Facundo Cabral, which took place on Saturday, July 9. Photojournalist James Rodríguez snapped these images at the […]