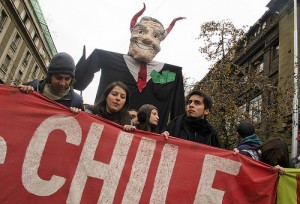 In an effort to end the almost five months of protests and unrest, the Chilean government proposed yesterday to increase public spending by five percent and add 7.2 percent to education outlays next year.

The country’s congress has until the end of November to approve the fiscal spending plan that would exceed $60 billion next year, President Sebastián Piñera said.

“We all want to grow faster but to go far we have to grow on rock not sand,” Piñera said. “The 2012 budget has been designed especially with the needs and aspirations of our middle class and most vulnerable sectors in mind.”

The move is intended to reduce the cost of education for families, alleviate poverty and fight crime. A major portion of the government’s plan – $11.65 billion – is earmarked for education and there is a plan to create a $4 billion scholarship fund, making this the biggest education outlay in Chile’s history, Piñera said.

The $60 billion plan won’t represent a problem for the country’s fiscal austerity, as spending growth is in line with its economic growth forecasts and Chile is the the only country in the Americas that is a net creditor.

Piñera’s announcement came minutes after a meeting between government officials and student leaders in the capital of Santiago to discuss educational reforms, as tens of thousands of demonstrators clashed with police in the streets. In what has become standard practice during the past few months of protests, police used water cannons and tear gas to repel groups of angry students who broke away from the protest to fight with authorities.

While student leaders and the government agreed to meet again on Wednesday, government officials reiterated that students could lose their scholarships and place in school if classes do not resume. “We’re not going to do favors for those who don’t return to their campuses,” said Education Minister Felipe Bulnes.

Classes have been put on hold since the protests began in late spring as students and other demonstrators have frequently taken to the streets in the thousands, representing the largest protest movement in Chile since the end of Gen. Augusto Pinochet’s military dictatorship in 1990.

The students main demands are that the central government take total control of education and increase spending on public schools. They have also asked for increased funding for universities, including scholarships, and an end to profit in education.

Student leaders said that classes would not be held while talks continued, as a way to put pressure on the government.

“Police should have cooperated to control the protest, but not suppress it,” said student leader Camila Vallejo.

As The World Looks To Mexico, News From Another Massacre Goes Unnoticed