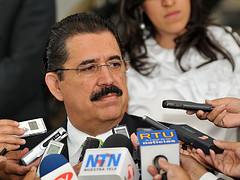 Top Story — The 40th General Assembly of the Organization of American States (OAS) voted on Tuesday to send a high-level delegation to Honduras in order to assess the situation in the country.

While the resolution does not clearly specify the purpose of the delegation, the decision to send it was apparently prompted by disagreement over whether Honduras should be readmitted to the hemispheric body.

The delegation will be headed by secretary-general of the OAS, José Miguel Insulza, and must make its recommendation “no later than July 30th, 2010,” according to a press release.

Honduras was dismissed from the OAS following a coup against the democratically elected government of Manuel Zelaya in the summer of 2009. The coup leaders accused Zelaya of attempting to perpetuate himself in power and subsequently held elections in which Zelaya was barred from participating.

Secretary of State Hillary Clinton announced on Monday that the Obama administration favors reinstating Honduras’ membership in the OAS. “Now it is time for the hemisphere as a whole to move forward and welcome Honduras back into the Inter-American community,” she said at the OAS meeting in Lima, Peru.

The proposal to reinstate Honduras has divided the OAS, with many Latin American nations arguing that Honduras must take further steps to demonstrate its commitment to democracy and human rights.

“Honduras’s return to the OAS must be linked to specific means for ensuring re-democratization and the establishment of fundamental rights,” Brazilian deputy foreign minister Antonio de Aguiar Patriota said, according to The BBC. He cited allowing Zelaya back into the country as one condition.

[…] of local talent which will have to work hard to beat some of the more experienced squads. Also the political unrest in the country of the past year might have players minds […]

Movement on Prisoners, Talks on Migration, Dissidents Dissent and a Candidate’s Descent « Cuba Central – The Blog says:
June 18, 2010 at 5:29 pm

[…] While the OAS resolution authorizing the visit does not clearly specify the purpose of the delegation, the decision to send it was apparently prompted by disagreement over whether Honduras should be readmitted to the hemispheric body, Latin America News Dispatch reported. […]