Characters from TV show "The Simpsons". 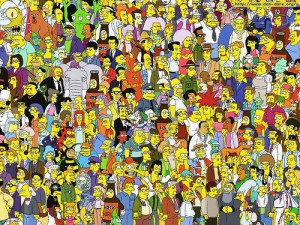 Characters from TV show "The Simpsons". Photo by SGFsoccer.com.

Brazil’s TV Globo network on Friday cut a scene from the Simpsons in which Homer Simpson kissed another male character, the bartender Moe.

Globo said that the minute-long sequence from the popular animated television series was censored because it aired on Friday morning and could have been viewed by children. The episode was also censored for phone pranks and scenes depicting alcoholism.

Since the half-hour television show began in 1989, the Simpsons’ humor is often aimed at an adult audience, satirizing American culture, current events and celebrities as it follows the antics of a “typical” middle-class American family.

In March, scenes from Simpsons episodes that showcased Homer’s ineptitude as a safety inspector at the fictional Springfield Nuclear Power Plant did not air in Germany, Austria and Switzerland out of concern for the post-earthquake nuclear emergency in Fukushima, Japan.

The Simpsons humor is NOT “often aimed at an adult audience,” it is always aimed at adults. It is not a kids’ show and never has been. Why would it air on a Friday morning?

LOL censored because children could see it. Serious only children see TV in the morning ?

Hey about the episode where the Simpson go to Brazil ? That was heavily censored too ever mention of Brazil was edited out http://nogueirajr.blogspot.com/2007/07/episdio-de-os-simpsons-que-critica-o.html

Was that becauseof the children too ?