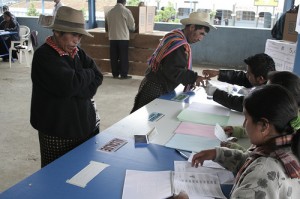 The former military general who promised a tough stance on violent crime took first place in Guatemala’s presidential elections Sunday, but failed to garner over 50 percent of the vote to avoid a run-off in November.

Otto Pérez Molina, a military man who played key roles in the country’s civil war and in negotiating the 1996 peace accords, led the race with 37 percent of the votes after four-fifths of the votes were tallied by Monday morning. Businessman Manuel Baldizón came in second with 23 percent of the vote.

“We are confident that in the next round, the second round on November 6, we will win again and win by a strong margin,” Pérez Molina said.

The two candidates platforms for their run-off will focus of security and combating violence in Guatemala, which were issues that both focused heavily on in their initial campaigns. Guatemala has become a major transit point for drugs coming to the United States from South America.

Between 2008 and 2009, the amount of illegal drugs seized in Guatemala doubled and authorities said that Mexico’s Zetas drug cartel has developed a strong presence in the country, especially near the northern border with Mexico.

Pérez Molina promised an “iron fist” approach to violent crime and fighting drug traffickers, but some analysts said that his failure to win outright suggests that there are concerns about his military past and that his crime-fighting plans may have been underestimated.

For his part, Baldizón has also taken a tough stance toward fighting crime, especially in northern Guatemala where he has built a network of businesses. His campaign pushed for requiring companies to give workers an extra paycheck, expanding Guatemala’s National Guard as well as greater use of the death penalty despite human right’s concerns.

If Pérez Molina were to win the run-off, he would be the first former member of the military to be president since the return of democracy in 1986, after the military dictatorships of the 1970s and 1980s. Human Rights advocates and some Guatemalans worry that there could be a return to extrajudicial killings that were rampant during the civil war.

“We’ve already seen the work the generals do,” said Mauricio Vaquez, who lives in a village near Cotzal, according to The New York Times. “A lot of people say they know the mountains. They know because they pursued us here, and that’s why we don’t want them.”

Other Guatemalans, however, see Pérez Molina’s strict view of crime-fighting as the only way to regain law and order in the country.

“He has the leadership to normalize the crime here,” said Gasper Utuy, from Chajul in the mountainous Ixil region. “I am not scared of the past returning because it can’t return. We had a war because of the guerrillas and now they’re not there. Now we have narcos and the Patriot Party can take care of that.”

Sunday’s election to replace current President Álvaro Colom was the country’s fourth since the return to democracy at the end of the 36-year old civil war. While violence during the election season was down from 2007, dozens of local and legislative candidates and aides were still killed during the campaign.

Spending for campaigns also reached an all-time high, due in large part to an influx of cash to candidates from Mexican drug cartels. 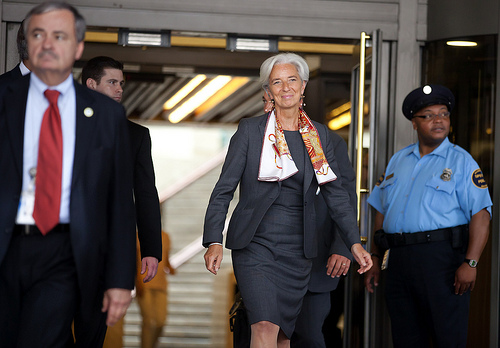