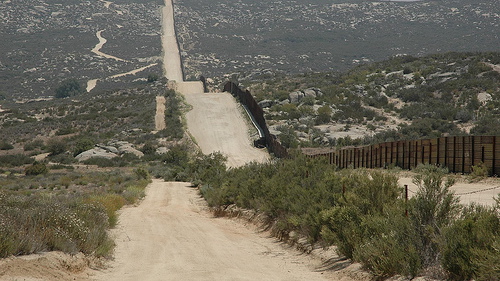 The wall separating the U.S.-Mexico border near Campo, California.

After being hit with a machete handle by his stepfather, 14-year-old Isau thought only the United States would provide some relief.

Isau is one of tens of thousands of kids passing unaccompanied into the country each year.

From toddlers to teenagers, they jump on trains through Mexico or make their way through the desert, the river, anything to join family, make money or escape war or abuse at home.

But advocates say they are often met with more harm on this side of the border– threats from Border Patrol agents, lack of food or water while waiting in detention to track down relatives, or simply the angst of being a child away from their parents – and no cohesive federal policy to protect them while they’re here.

Many are older teenage boys, often traveling from Central America. But immigration judges have seen unaccompanied children from around the globe and as young as 18 months.

In their most recent report to Congress, the Office of Refugee Resettlement reported placing 8,212 unaccompanied migrant children in housing in 2007.

But the Texas-based Center for Public Policy Priorities estimates that an additional 35,000 more children are immediately returned to neighboring countries, suggesting that tens of thousands of children enter each year alone.

“These children are not officially entered into the immigration system,” the report said, adding that instead, they often are sent to the nearest port of entry without appearing before a judge.

According to a Commission report, of the 90,000 children apprehended by the Border Patrol along the southern border in 2007, roughly 10,000 were unaccompanied minors.

They share stories of rape on trains rumbling toward the border, starvation in the desert and a muddled idea of what to do when they reach the States.

After a transfer from concrete Border Patrol holding cells, children filter into a variety of facilities, from dingy, frigid cells to friendly rural shelters.

A San Diego facility the Commission visited for a 2002 report was “dark and generally run down,” with a policy requiring restraints on transported children. In other places the Committee visited, children slept next to non-immigrant juvenile offenders.

In 2003, the Homeland Security Act transferred the custody of unaccompanied migrant children to the Office of Refugee Resettlement, which created the Division of Unaccompanied Children’s Services to take care of them.

Children are now better separated from adults and have improved access to lawyers, Brané said. But, she cautions, conditions were so poor, the government still has a long way to go.

Earlier this summer, her group visited 30 programs and talked to more than 200 children, trying to assess what had changed.

Some children don’t get blankets, agents told the Committee, because they became too bug-infested when dirt-covered children held them.

A story in the 2009 report tells of a woman, Carmen, who crossed the river with her five-month-old daughter.

Taken to a cell, she was refused something warm for the baby, Lily, whose clothes were wet. The next morning, when Lily turned blue, both were taken to the emergency room, Carmen shackled and Lily diagnosed with hypothermia and pneumonia.

Aside from the living conditions, Brané is also concerned with the children’s access to education and mental health care.

“All of them have a terrible journey up here, lots of sexual assault for both boys and girls, a lot of abuse,” she said. Also, she added, children carry “a lot of guilt and panic over not sending money home or being caught.”

Some say trauma can be caused on the United States side too.

Another child, 16-year-old Giovanni, was held after Pacific Northwest law enforcement picked him up at a car accident. Detained for days, he was returned to the Mexican border in shackles. He called his father for the first time in Mexico, crying at his voice.

Not all facilities paint a bleak picture. The Children’s Village, a New York nonprofit, provides refuge for hundreds of unaccompanied immigrant children every year. The children receive medical care, counseling and English classes.

“They’re just incredibly optimistic kids, incredibly resilient,” he said. “They want good things for themselves and their families.”

Fidel Castro Apologizes For Treatment Of Gays During The Revolution

[…] Tens of thousands of unaccompanied children immigrants are presenting perplexing problems for U.S. policymakers. Alison Bowen explains in her latest post at Beyond Borders. […]

[…] Tens of thousands of unaccompanied children immigrants are presenting perplexing problems for U.S. policymakers. Alison Bowen explains in her latest post at Beyond Borders. […]

[…] Bob is doing this hike in two stages. The first half was done last summer. He’s on the second half now. The plan is for him to celebrate his 80th birthday with a finale in Campo, California […]

It really breaks my heart to see and hear about these types of situations about young children only trying to better themselves and help thier families. I saw a documentary last night (Which Way Home) that made me realize how truly blessed and fortunate that I am able to be where I am today. May god bless and watch over those children & people trying to make it here to the states.

I have also watched the documentary which way home.. It made me so so sad to see all of the children trying to jump on trains & crossing through deserts & all the bad things that happen to them on the way to the US.. I just wish there was more that we could do or way to help Mexico so that they could have a better economy 🙁

Given the topic of immigrants in upcoming elections, a wonderful new book that helps explain the role, struggles, and contributions of immigrants is “What Foreigners Need To Know About America From A To Z: How to understand crazy American culture, people, government, business, language and more.” It paints a revealing picture of America for those foreigners who will benefit from a better understanding. Endorsed by ambassadors, educators, and editors, it also informs Americans who want to learn more about the U.S. and how we compare to other countries around the world on many issues. As the book points out, immigrants are a major force in America. Immigrants and the children they bear account for 60 percent of our nation’s population growth. Legal immigrants number 850,000 each year; undocumented (illegal) immigrants are estimated to be half that number. They come to improve their lives and create a foundation of success for their children to build upon. Many bring their skills and a willingness to work hard to make their dreams a reality, something our founders did four hundred years ago. Chapter after chapter identifies those who became successful in the US and how they contributed to our society. However, most struggle in their efforts and need a helping hand. http://www.AmericaAtoZ.com